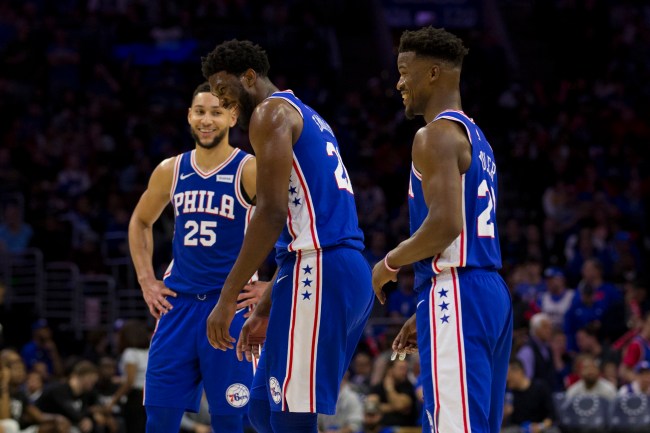 During last night’s Sixers-Nets game Joel Embiid was assessed a flagrant 1 when he forcefully elbowed Jarrett Allen in the head.

Joel Embiid caught Jarrett Allen with a hard elbow and was given a flagrant 1. pic.twitter.com/scfnb8Oj1N

Many felt that Embiid should have been ejected for deliberately swinging his elbow at Allen.

Embiid should’ve been hit with a flagrant 2 if we gone keep it a buck. Refs just didn’t wanna eject him because it’s the playoffs and he the best player on the floor

That Embiid call was terrible. You can see the extra umph in the replay. NBA didn’t want to eject a star. That’s weak on their end. Did it to probably the nicest kid in the league, anyone else gets in his face after that.

If that was not a flagrant 2 on Joel Embiid, I am not sure what is.

So, they eject Bledsoe for chucking a ball at Embiid’s midsection but Embiid can put full force behind an elbow to the jaw and be allowed to remain in the game? K.

Embiid was not ejected and the Sixers went on to route the Nets.

After the game, Embiid tried to apologize for elbowing Allen in the head but he and Ben Simmons couldn’t hold back their laughter.

Sixers' Joel Embiid & Ben Simmons crack up laughing while Embiid was trying to apologize for flagrant elbow to Nets' Jarrett Allen during Game 2 win: "I got him pretty good but I'm sorry about it. it wasn't intentional. …. I'm not usually humble that's why he's laughing." pic.twitter.com/Ll1wuTHEk3

Man, I think Joel Embiid and Ben Simmons laughing like this is more disrespectful than Joel’s elbow and Ben’s comments calling Kurucs “The other kid.” pic.twitter.com/lbJKdoMZ2k