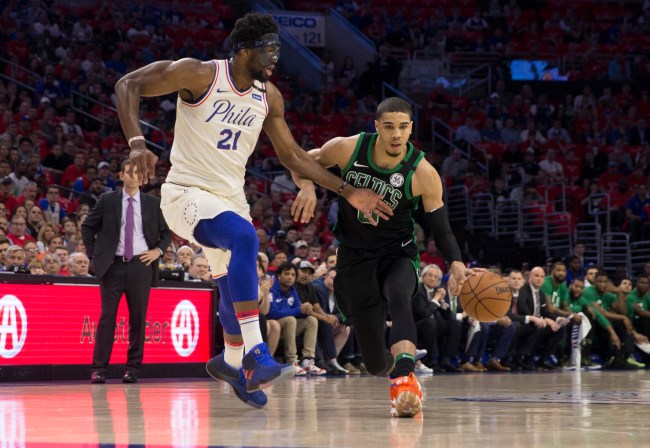 It’s been two months since Jayson Tatum’s Celtics eliminated Joel Embiid and the Sixers in a physical Eastern Conference semis. While the 20-year-old Tatum advanced to take on LeBron in the Conference Finals, Embiid was in the Bahamas balling on Bill from Accounting and demoralizing random dudes on the courts of South Philly.

Now that the offseason is here, the two young studs are hungry to live up to the limitless potential bestowed upon them. Drew Hanlen, NBA Strategic Skills Coach and CEO of Pure Sweat, has a YouTube series called Unseen Hours that takes fans behind the scenes of the offseason training process.

In the latest episode, Embiid, Tatum, and sixth overall pick Mo Bamba take turns going one-on-one, displaying jaw-dropping skills, and shit talking–Embiid manages to compare himself to Jordan, call himself the ‘walking GOAT’ and telling both Tatum and Bamba they are incapable of stopping him.

Check out the video below.

Jayson Tatum, Joel Embiid, and Mo Bamba switching off playing one on one. pic.twitter.com/BWmAdcRygG

I have no idea how Jayson Tatum got this shot off over Mo Bamba. pic.twitter.com/6L1izA3g1u