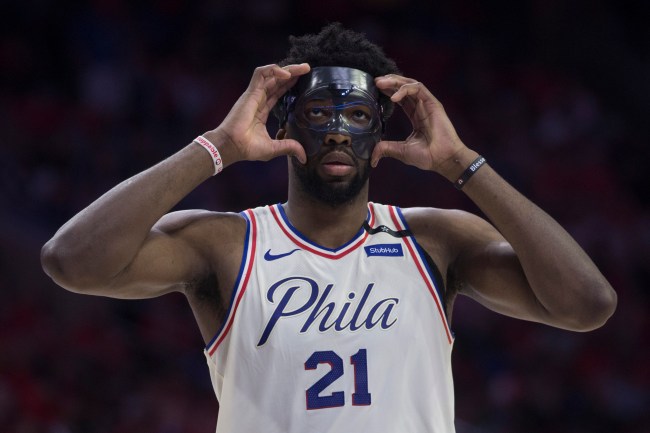 It’s officially the Summer of Joel Embiid dunking on unsuspecting souls all over the world. It all started shortly after the Sixers got bounced from the 2018 NBA Playoffs and Joel Embiid was filmed dunking on some pour sool at the Atlantis Resort in The Bahamas (video below).

At the time, we assumed it was an isolated incident but we were wrong. Since that incident, Joel Embiid has been filmed dunking all over random ass dudes two more times and these are just the dunks that were caught on camera. The latest incident came in Philly, where Joel Embiid appears to be playing in a random pickup game on 9th and South.

This particular dunk is ABSOLUTELY DEVASTATING because Embiid actually bounces the basketball off the dude’s face before charging the net and throwing down a colossal windmill dunk. If this isn’t the most humiliating moment of that man’s life then I cringe to think about what could’ve possibly been worse:

Here’s video, courtesy @astrait25, of Joel Embiid bouncing a ball off a dude’s face and then windmilling on his head at a park at 9th and South in Philly. Phenomenal. pic.twitter.com/XS99pFhXat

If you want to catch up on the recent dunks from Joel Embiid, his Summer of ruining average dude’s lives across America, you can check them out here (via Hot Clicks):

Joel Embiid is out here turning random dudes at the park into Aron Baynes 😂
(via @feliciaricci) pic.twitter.com/VUNxHsyUHe

I guess it would be helpful to send a word to the wise that if you see Joel Embiid playing in a park this Summer you should be wary of playing because there’s a pretty good chance you’ll get dunked on, it’ll be filmed, and you’ll end up on the Internet as that guy.