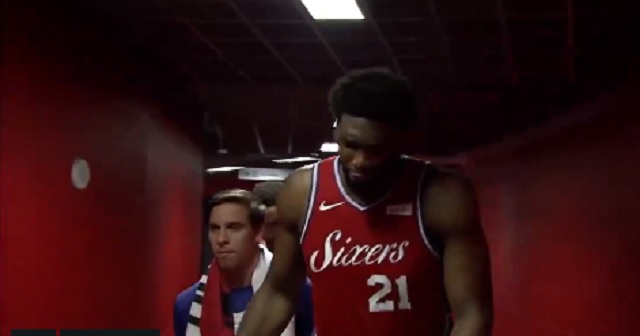 Kawhi Leonard cemented his name in NBA history when he delivered an iconic series-ending shot against the Sixers that helped the Raptors make their first Eastern Conference finals.

After the game, a very emotional Joel Embiid, who had played in the series with various illnesses, was seen crying on his way to the locker room.

Powerful scene outside the 76ers locker room. Joel Embiid's girlfriend Anne de Paula was waiting outside. A weeping Embiid stepped out. They kissed. Cried. She gave him some encouraging words & wiped his tears. Embiid returned to the locker room, looking toward sky, like, 'Why?'

Thank you, Joel Embiid. You will be back. pic.twitter.com/G2uqTP2Day

Many who hate Embiid for his cocky persona where overjoyed to see the big man in tears.

While others respect Embiid’s passion for the game.

A hater would troll, but this type of emotion shows the passion you have for the game and how much you love the game. I troll Embiid sometimes but he came off a hell of a season. Sad to see him go out like this. He’ll comeback stronger next year tho

Gained a new respect for Embiid. True passion. If you make fun of a guy for crying after a devastating loss you’ve more than likely never accomplished much athletically. https://t.co/kl8m3bcJlc

Anyone who says anything negative about Joel Embiid crying at the end has no idea what a game like that means for the career of a player. I respect that kind of passion for the game/team. Great season Sixers, see you next year