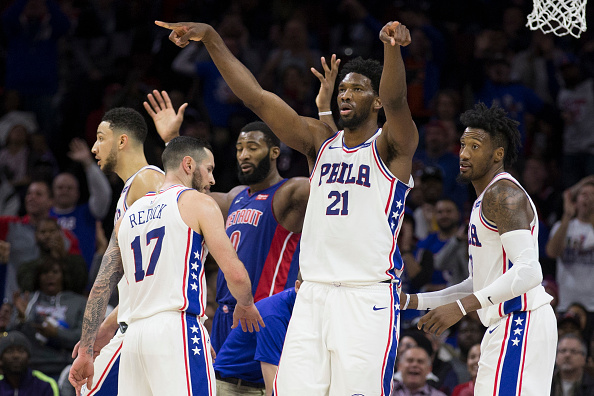 Last week Sixers big man Joel Embiid and Pistons center Andre Drummond got into a beef after Embiid was able to get Drummond ejected with this flop.

Joel Embiid got Andre Drummond ejected, and he let everyone know pic.twitter.com/16p7xDKp4J

“I think I own a lot of real estate in his head,” Embiid told reporters after the game. “We lost, so I’m not supposed to talk trash, but he knows damn well that he can’t guard me.”

To which Drummond responded:

Lol does he? If that’s so he wouldn’t be so excited to have me off the floor? Think about it that’s a silly statement ! I’ll take the W though enjoy flight home #Emmyaward winning actor

Erummond continued to mock “out of shape” Embiid on Instagram. mb

Today, the two faced each other once again and it was a one-sided affair as Embiid absolutely dominated Drummond all game.

Joel Embiid dominated Andre Drummond! 39 points and 17 rebounds compared to 8 points and 9 rebounds. I love that Embiid talks smack but what I love even more is that he can back it up 💯

I own a lot of real estate in @andredrummondd head and I’m on my way to build more 🏘🏘🏘 #Bum #TheProcess pic.twitter.com/Mrf2NcNL4r

Embiid then posted this video oF Drummond dancing on IG.

After dropping 39 and 17 on Andre Drummond, who was held to 8 points, Joel Embiid uploaded this video of Drummond to his IG story 💀💀💀💀 #TheProcess pic.twitter.com/xWyporAO62

Drummond is probably better of by not saying anything because he obviously can’t hang with Embiid on the court.