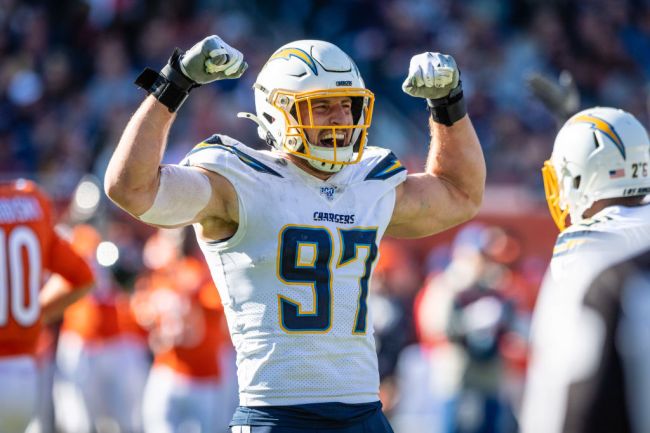 The Los Angeles Chargers handed the Las Vegas Raiders their first loss of the season on Monday night and looked dominant in the process. The Chargers held the Raiders to just 14 points, which is quite the feat seeing as how Las Vegas’ offense was averaging 30 points per game through the first three games of the season.

One key piece for the Chargers’ strong defensive performance was Joey Bosa, and he was absolutely feeling himself following his team’s win.

Speaking with reporters during his postgame press conference, the 26-year-old torched Raiders’ QB Derek Carr saying that he “gets shook” after being hit a few times. Bosa even went as far as to say that after the first few hits he took, Carr started curling into a ball.

Joey Bosa on Carr: "We knew once we hit him a few times, he really gets shook. And you saw on (Covington's) sack, he was pretty much curling into a ball before we even got back there. Great dude, great player…but we know once you get pressure on him, he kind of shuts down."

Bosa got to Carr once during the game for a sack while in total the Chargers sacked him four times and delivered a total of seven quarterback hits.

Carr and the Raiders were delivered a reality check by the Chargers as Los Angeles showed the NFL that it may be the team to beat in the AFC West moving forward.

The Raiders and Chargers will meet again in Las Vegas to close out the regular season on January 9.