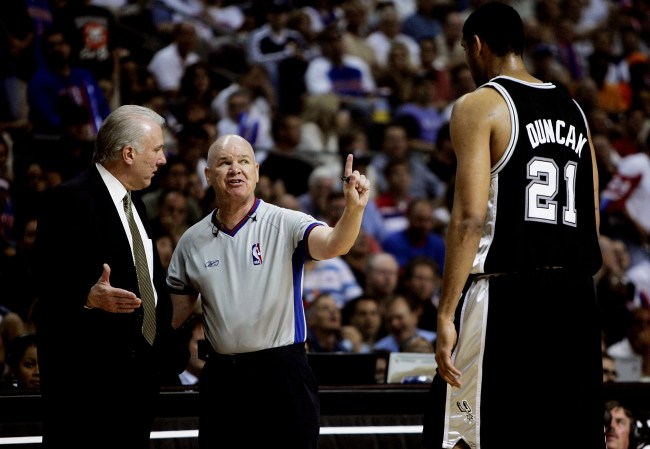 Of all the NBA storylines in recent memory that the NBA wishes we’d forget–Malice in the Palace, Gilbert bringing a gun into the locker room, Tim Donaghy–one that may be the most understated is the Joey Crawford/Tim Duncan episode.

For those who need a refresher, back in 2007, after a string of unforgivably awful calls, veteran referee Joey Crawford ejected Tim Duncan while he was on the bench. For laughing. It will go down as one of the most baffling, head-scratching calls in NBA history. Mind you, Duncan claimed that before the ejection, Crawford challenged the Spurs big man to a fist fight.

Do yourself a favor and watch it unfold below. It’s difficult to believe this five minutes of basketball actually happened.

Crawford, who retired in 2016 after a (mostly) illustrious 39 year refereeing career, was suspended for the rest of the season for his role in the episode and David Stern smacked him with a $100,000 fine.

Stern suspended me for the rest of the season. I thought there was a good chance my career might be over. Stern orders me to go see a Park Avenue psychiatrist. He tells me to go twice — two hours each session. This guy is going to make a determination on whether I’m crazy or not. I go up, and I’m scared to death. I’ve already been fined $100,000. I’m in a suit, and I’ve got sweat all the way down to my belt. So, this psychiatrist didn’t know a basketball from a volleyball. After two hours, he says, ‘OK, we’re all done.’ I said, ‘Whoa, whoa, whoa, whoa! I’m supposed to come another day for another couple of hours. Have you already decided I’m crazy?’ He said, ‘You’re not nuts.’ I said, ‘Well, what am I? What’s my problem?’ He said, ‘You’re overly passionate about your job.’ I thought, ‘OK, I can live with that diagnosis!’

I ended up going to see Dr. Joel Fish in Philadelphia. Everybody in Philly in the sports world went to see him when they were having problems. The guy saved my career. I started seeing him a couple of times a week.

He would tell me, ‘Joe, if you feel [the anger] coming on, just do something with your hands. Put them by your side or behind your back.’ He told me, ‘Keep reminding yourself, calm down, calm down. If somebody was getting on me about a bad call, he’d remind me, ‘Slow your breathing down. Remind yourself you’re a good ref.’ Those things helped me get through my last 10 years in the NBA.