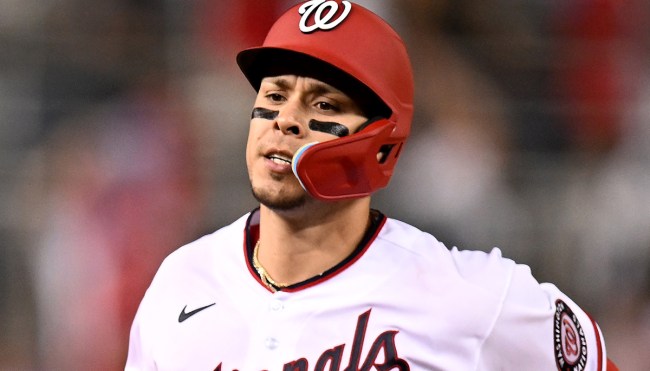 You can usually count on the Major League Baseball trade deadline to produce a ton of drama and suspense, and that’s exactly what we got this year courtesy of some of the major names that swapped hands on Tuesday.

None of those transactions came close to topping the one that brought the Juan Soto sweepstakes to an end. After weeks of speculation, the Nationals sent the superstar outfielder who recently turned down a $440 million extension to the Padres along with Josh Bell in exchange for Luke Voit and five prospects (San Diego also attempted to sweeten the pot by throwing Eric Hosmer into the mix, but his decision to exercise his no-trade clause wasn’t enough to derail the deal).

The trade meant Washington had to reshuffle its roster ahead of its showdown with the Mets at home on Tuesday night. One of the voids created as a result was filled by Joey Meneses, a first baseman who first joined the Braves farm system in 2011 and played 894 games for an impressive array of minor league teams (and one club in Japan) before finally getting the chance to make his debut in The Show.

We were subsequently treated to one of the cooler baseball moments in recent memory when Meneses stepped up to the plate bottom of the seventh inning.

Yoan Lopez opened the at-bat with a 96 MPH fastball down the heat of the plate and Meneses took full advantage by recording his first MLB hit in the form of the solo home run that landed in the right field bleachers to give the Nats an insurance run in what would turn out to be the final tally in the  5-1 l win over New York.

It’s safe to say plenty of people were pretty amped for the journeyman rookie.

Before his debut tonight, Joey Meneses said: "In all of the years that I've played in the minor leagues coming up, I've been very consistent with my offense at the plate. And I think that's the reason why I'm here, and hopefully that continues up here.”

Quite the whirlwind for Joey Meneses: During his scrum, a big new Nationals-issued rolling bag was by his locker. His bat bag still has DCA luggage tags on it. After he finished, an authenticator came over to talk about his first home run ball.

Wonderful moment for former #Braves farmhand Joey Meneses, who made his MLB debut for Washington.

Joey Meneses goes deep in his first game with the #Nats. He's 30 and he has waited years for tonight. First hit ends up in the seats. I ❤️ this sport. pic.twitter.com/tu1LWIMfjg