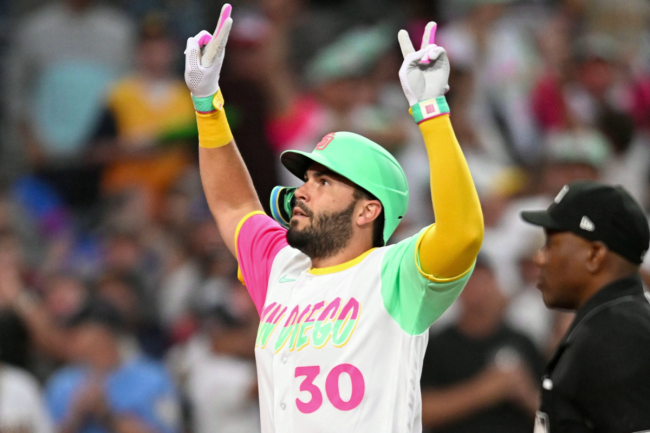 Eric Hosmer was expected to be part of the blockbuster deal sending sluggers Juan Soto and Josh Bell to San Diego. But the first baseman has other plans.

It was announced on Tuesday morning that Soto and Bell would be headed to the Padres, giving them one of baseball’s best lineups. The club is looking to make a postseason push, and they have become a true World Series threat according to the sportsbooks.

With Bell now slated to move in at first base, the Padres tried to deal Hosmer. But there’s one thing keeping the team from sending the lefty to Washington.

Hosmer apparently listed the Nationals as one of ten teams that he did not want to be traded to. The Padres included him in the deal anyway, meaning he’d have to approve the trade terms before leaving San Diego.

According to MLB insider Jon Heyman, he has since rejected the trade.

Luckily for the Padres, the rejection won’t affect Soto’s winding up on the West Coast. Both teams have agreed to move the outfielder despite Hosmer’s denial.

But it certainly makes things a bit awkward for the Padres with Hosmer.

Fans on social media have been quick to post reactions to the news, and the immediate response is hilarious.

Many around the MLB are responding to the Eric Hosmer trade rejection. How will it affect the Padres?

Eric Hosmer to the Padres: pic.twitter.com/PRgAIAtbTe

When Eric Hosmer goes back to San Diego @Starting9 pic.twitter.com/v1VxITdkyg

This is the most power Eric Hosmer's had all season

"Why won't you accept the trade?"

What are the Padres’ next steps?

While he won’t end up in Washington, the Padres do not plan on bringing Hosmer back to San Diego.

Jon Heyman just reported that Hosmer will instead end up with the Red Sox where he’ll hope to help Boston reach the playoffs. A happy ending for everyone involved.