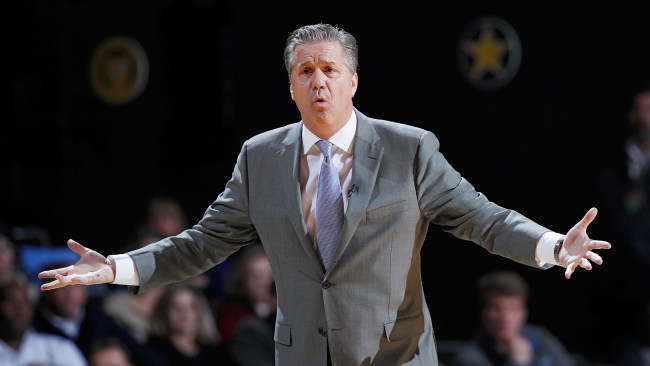 There are a lot of words that can be used to describe University of Kentucky head coach John Calipari, but “subtle” is not one of them.

The unapologetic, and very successful, coach knows what he wants, how to get there, and doesn’t care what other people think.

Never was that more apparent than on Sunday during a live interview with ESPN after Calipari’s Wildcats earned a number two seed in the 2019 NCAA basketball tournament.

He didn’t even bother to take the plastic off the frames on the floor. Just a reminder to any potential recruits that if you want to be successful like John Wall, Anthony Davis, DeMarcus Cousins and Derrick Rose, then Cal is your man and Kentucky is the place to play.

So, does Calipari have like a special closet where he keeps framed jerseys of all his players who went on to become top five NBA draft picks that he breaks out only for special occasions? (By the way, three of those behind him went number one overall and all four of them only played one year of college basketball.)

Needless to say, people on Twitter were in awe of Cal’s unabashed flex, including his own kids…

This is our regular everyday basement 😂😂

I like to imagine this is just a wing in his house he only goes to for this interview yearly.

He’s always recruiting. That’s why I love me some John Calipari.

He doesn’t even have them unwrapped, god I love this picture so much

He didn’t even bother to take the shrink wraps and styrofoam corners off these.

Calipari live on ESPN with the framed jerseys of his NBA players behind him. That’s just rich. Absolutely rich. pic.twitter.com/W9A4UbaRWm

Simply displaying the rich history of Kentucky basketball 🏀Love it! 🔵😸🔵😸🔵😸🔵😸

This video of Calipari giving everyone the eye is hilarious pic.twitter.com/IwgajZwCdE