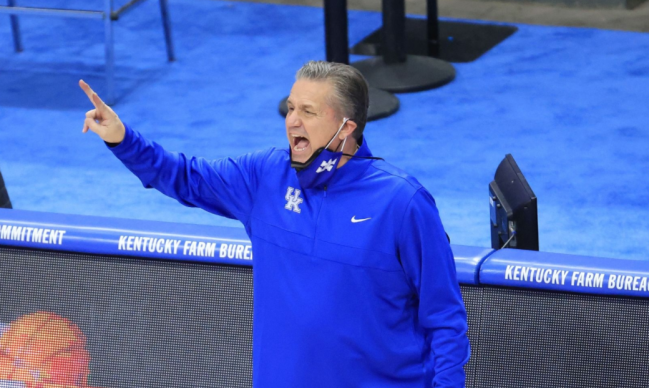 With the circumstances we find ourselves living in these days, handshakes between coaches at the end of college basketball games are non-existent for the time being. Now, we see coaches give a friendly wave and shout a message across the court, but Kentucky head coach John Calipari decided to take a different route following the Wildcats’ 82-78 win at Vanderbilt on Wednesday.

Instead of giving a wave or a thumbs up to Vanderbilt head coach Jerry Stackhouse, Calipari threw up the peace sign his direction, and the former two-time NBA All-Star wasn’t happy about it. Stackhouse threw up his hand in disgust and walked off the court.

What a bizarre move by Calipari. Throwing up the peace sign in general is just strange, but it’s even weirder to do so after beating the worst team in the SEC.  On top of all that, Kentucky is in the middle of having its worst season of my 28 years on Earth, you can’t be throwing up deuces after your team improves to 7-13 on the year.

I’m not saying I don’t like the drama here, but Kentucky is not good. The team’s only shot at making the NCAA Tournament is winning the SEC Tournament and the chances of that happening are unbelievably slim.

It’s been an interesting few days for Stackhouse. Not only did he get hit with a pece sign from Calipari, but he also sounded off toward Vanderbilt fans that have been critical of him this season while implying those that are being hard on him are racist, Trump supporters.