John Cena Takes A Bubbling Lava Dump All Over The NFL Combine Using The ‘Bench Press’, And His Reason Is Legit 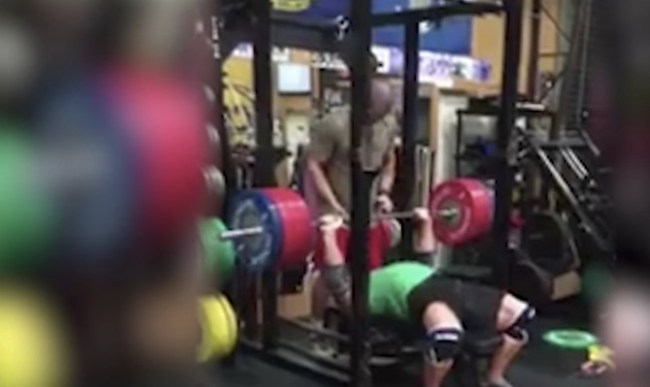 In October 2015 John Cena shocked the world of sports when he tweeted a video of himself benching 463-pounds, a feat that Cena claims he pulled off again recently for a Muscle & Fitness video shoot. That is an ASININE amount of weight for any human being to bench press, and it’s without question an impressive achievement on the part of John Cena. But, this physical achievement is making the rounds again because in a recent interview with SI Now, John Cena shit all over the NFL for using the bench press as a test of skill during the NFL Combine.

For context, here’s that Twitter video of John Cena bench pressing an ungodly amount of weight:

If you can’t see that video and it isn’t loading from Twitter, I assure you this isn’t one of those ‘YOU CAN’T SEE ME’ John Cena things. You can click here to see it on John Cena’s Twitter timeline.

Anyways, John Cena makes the argument that the bench press should NEVER be used in the NFL combine and his reasoning behind this argument is actually pretty legit. It’s specifically the ‘bench press for reps’ test that John Cena takes issue with. Oddly, this is the second time this week I’m finding myself talking about this particular NFL combine test.

Earlier this week I brought you bros footage of a 15-year-old football recruit from Georgia who put up 31 reps of 225-pounds as a HS sophomore. That’s a feat that only a handful of college players at the NFL Combine are even capable of doing. Did I ever expect to find myself blogging about the NFL Combine Bench Press For Reps test twice in three days? Absolutely not, but here’s what John Cena has to say:

“It’s the most worthless test of skill that they have at the Combine. And in an organization like the NFL they’re going to come back with ‘Eh, what does the kid know?’

But I know a lot about Strength and Fitness, and upper body reps for a segregated weight for max is a HORRIBLE test for the Combine athlete. I love the Agility test, I love the Sprint tests, Vertical Jump and all that stuff is really fun to watch. But, step your game up with the strength assessment, NFL.”

John Cena going all in on the NFL for having a shitty ass test of strength. I kind of love it. Nobody in the NFL can reasonably say that John Cena doesn’t have an expert-level knowledge of strength and fitness. He knows what he’s talking about. So I’d like to see any other experts out there refute what John Cena has to say.