15-Year-Old Is A Total Freak Of Nature, Benches 31 Reps Of 225-Pounds Before He Can Even Legally Drive 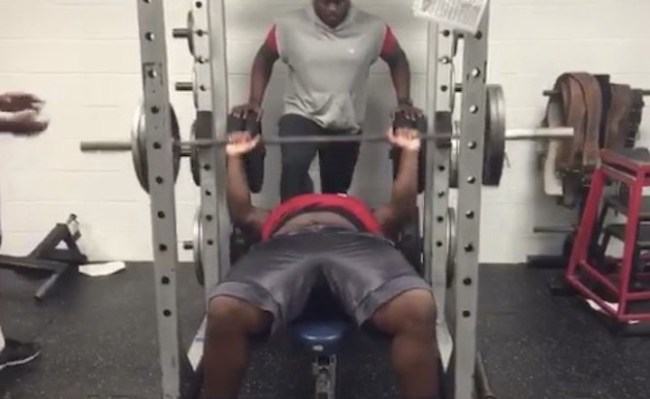 Robert Cooper is one of the nation’s most prized football recruits for 2018. He’s a 4-star defensive tackle at Snellville, Georgia’s South Gwinnett High School, he weighs 350-pounds, stands 6’3″, and he just blew coaches away by uploading a video of himself benching 31 reps of 225-pounds.

He’s currently a Junior, and committed to Florida State Football’s 2018 Recruiting Class, but this video shows Robert Cooper last year, when he was just 15-years-old as a Sophomore:

Does it actually have any bearing on this kid’s athletic abilities and/or his future prospects as one of the top defensive tackles in the NCAA? Kind of, maybe, it’s not really clear. I think the biggest takeaway here is this kid’s light years ahead of the competition, in terms of physical maturity.

2017 National Signing Day is this Wednesday, which means we’re a full year away from Robert Cooper actually signing with the Florida State Seminoles. A LOT can happen between now and then, and it’ll be interesting to see how aggressively other coaches pursue Cooper as a recruit after seeing this footage.