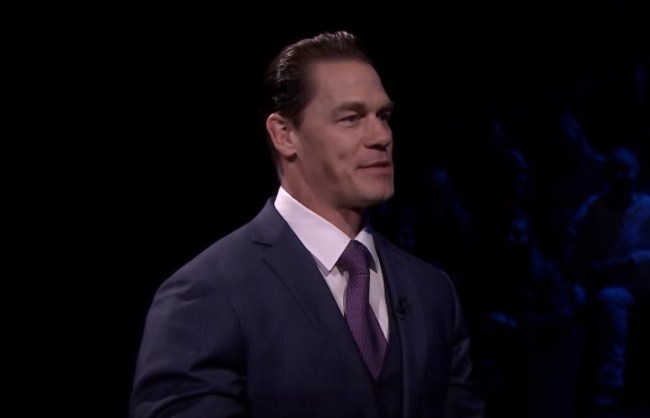 John Cena is a pretty jacked dude as he stands 6’1″ tall with a 251-pound frame of pure muscle. It’s hard to imagine a time when he was ever tiny but according to John Cena himself the last time he was scrawny was prior to puberty.

Cena grew up in Massachusetts in the town where basketball was invented but he chose to play football. John was a team captain (the Defensive captain) and this shouldn’t come as a shocker to anyone who’s seen him in the WWE ring spearing a dude. But it wasn’t his herculean frame that freaked out players on the opposing teams, John used psychological warfare.

He was just a guest on The Tonight Show Starring Jimmy Fallon where he talked about his use of bagpipes in psyching out his opponents in high school football. John also played ‘Fish Slap’ with Jimmy which is exactly what you think it is (clip below).

Is it just me or did every high school have a guy exactly like John Cena? We had this same dude, a little bit shorter but incredibly jacked and with a comically chiseled jawline. He was one of those people who believed birds weren’t real long before that conspiracy theory hit Reddit and he also believed that all of the palm trees in Florida were fake.

He’d try and take everything to the extreme just like Cena did with this bizarre bagpipe intimidation. Here’s that ‘Scotland The Brave’ song by the way, if you wanted to pump this banger in the office today. What’s strange to me is how completely non-intimidating this would be in my hometown because one of the big local high schools has an entire band full of bagpipers and has for decades.

Here’s that ‘Fish Slap’ video that John played with Jimmy Fallon for anyone out there who wants to see John Cena slap a grown man with a dead fish.