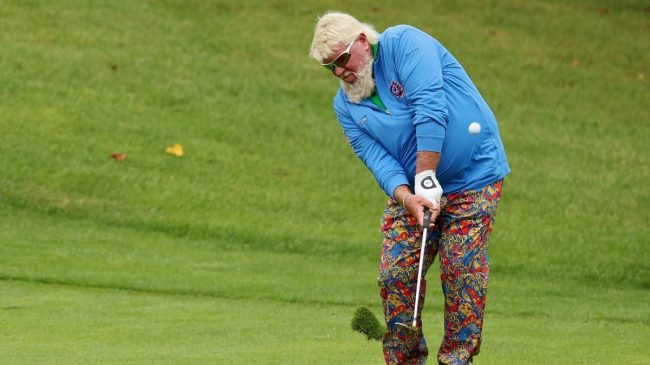 Fans across the country are fired up for the start of the 2022 college football season. That includes golf legend John Daly. Daly, a two-time major winner, is a University of Arkansas graduate and a diehard Razorbacks fan.

He’s also perhaps one of the world’s most accomplished drinkers. Daly’s incredible drinking habits have even led some fans to create a golf tournament combining his two loves: golf and beer.

On Saturday, the golf superstar showed off just why he’s so beloved by fans across the country.

ESPN took its SEC-centric pregame show, SEC Nation, to Fayetteville on Saturday ahead of a top-25 showdown between the Razorbacks and visiting Cincinnati.

As everybody knows, you can’t go to Fayetteville and not have Razorbacks superfan John Daly on the show. So that’s just what hosts Marty Smith and Ryan McGee. And the results were incredible.

John Daly is the king pic.twitter.com/14zyQPE7cD

Smith and McGee had Daly attempt to read off the show’s “hillbilly headlines.” One problem, Daly wasn’t in any sort of state to do.

But Daly’s no amateur. He showed his experience, settled in, and showed loved to his Razorbacks.

Credit is due to ESPN as well. The network didn’t shy away from Daly’s sometimes controversial drinking habits. Instead, the network leaned in. They even had Daly join Smith and McGee for a game of beer pong.

The Razorbacks and Bearcats kick off at 3:30 p.m. on ESPN. DraftKings Sportsbook lists Arkansas as a 6.5-point favorite.