John Daly Says He Can Fix Tom Brady’s Golf Game In 10 Minutes, Is More Than Willing To Help Him Out 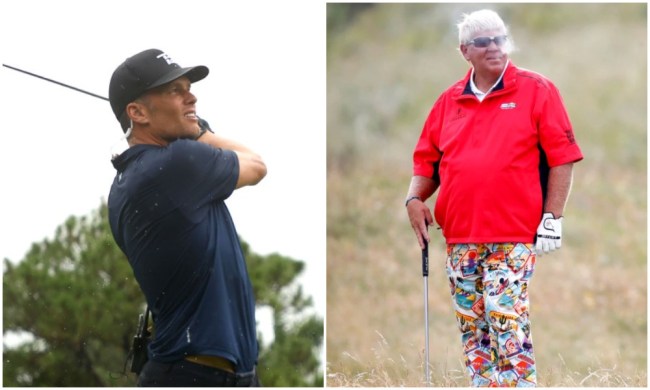 Tom Brady had a rough time during ‘The Match II’ alongside Tiger Woods, Phil Mickelson and Peyton Manning. Sure, he had an impressive hole-out on the front nine, but he was by far the worst player in the foursome.

You could argue that Brady’s struggles were the most entertaining aspect of the match, but that doesn’t take away from the fact that the GOAT of the NFL needs some help when it comes to his golf game and none other than John Daly has said he can fix some of his issues.

Daly joined TMZ and said that he can fix Brady’s problems in just one, 10-minute lesson. Daly is down in Florida at the moment and wants to link up with Brady to get his game into order.

One of Brady’s most glaring issues was his struggle with the driver. It was clear he wasn’t confident with the big stick from the get-go after electing to go with an iron or 3-wood off the tee for the first handful of holes. Daly explained that he can turn Brady’s driver into a weapon on the course and add 100 yards off the tee.

“That’s the easiest club in the bag to hit,” Daly says. “It’s the biggest face in your bag. And, somebody’s not helping him. We need to get his driver right. We got to give him a driver. He’d hit it probably an extra 100 yards and the whole game would change for him.”

Daly, a two-time major winner, is known for sending rockets off the tee with the driver and knows a thing or two about getting that club working. As someone who has personally always struggled with the driver though, him saying it’s the easiest club in the bag to hit is certainly an opinion I don’t agree with.

I just need a 10-minute lesson on the driving range with Daly though, he’ll fix me up.