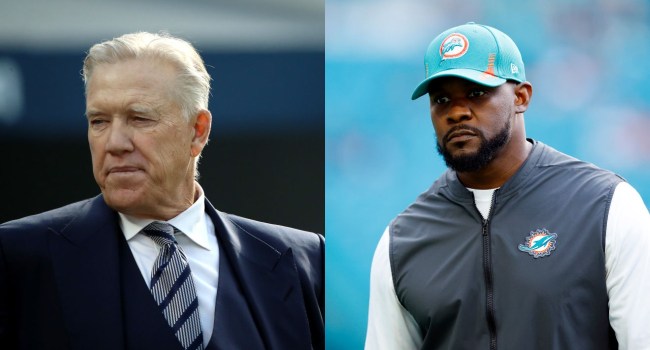 Former Miami Dolphins head coach Brian Flores rocked the sports world on Tuesday when news broke that he was suing the National Football League over allegations of racism in the hiring process.

Flores, who previously coached with the New England Patriots prior to his stint in Miami, alleged — among other things — that Hall of Famer John Elway and other Denver Broncos executives showed up hungover to his 2019 interview with the team.

“They [Broncos execs] looked completely disheveled, and it was obvious that they had drinking heavily [sic] the night before,” Flores’ complaint alleges, via For The Win.

On Thursday, Elway — the 61-year-old former Broncos quarterback and current President of Football Operations — responded to Flores’ allegations, calling them “false and defamatory.” Elway was the Broncos’ general manager and executive VP of football operations at the time of the reported interview.

“While I was not planning to respond publicly to the false and defamatory claims by Brian Flores, I could not be silent any longer with my character, integrity, and professionalism being attacked,” Elway said in an official statement.

“I took Coach Flores very seriously as a candidate for our head coaching position in 2019 and enjoyed our three-and-a-half hour interview with him. Along with the rest of our group, I was prepared, ready, and fully engaged during the entire interview and Brian shared his experience and vision for our team. It’s unfortunate and shocking to learn for the first time this week that Brian felt differently about our interview with him,” Elway continued.

Elway’s comments then take on a more defensive tenor as he categorizes Flores’ “assumption” as “subjective, hurtful, and just plain wrong.”

“For Brian to make an assumption about my appearance and state of mind early that morning was subjective, hurtful, and just plain wrong. If I appeared ‘disheveled’, as he claimed, it was because we had flown in during the middle of the night — immediately following another interview in Denver — and were going on a few hours of sleep to meet the only window provided to us.”

Elway concludes his statement by reiterating that Flores was interviewed for the head coaching position, which ultimately went to Vic Fangio (fired this year after going 19-30 in three season) in “good faith”:

“I interviewed Brian in good faith, giving him the same consideration and opportunity as every other candidate for our head coaching position in 2019.”

In addition to Flores’ allegations about Elway and the Denver Broncos, his lawsuit also alleges that the New York Giants put him through a “sham” interview and that Miami Dolphins owner Stephen Ross allegedly offered to pay him $100,000 per loss in an effort to tank the team’s record and secure a better draft pick.