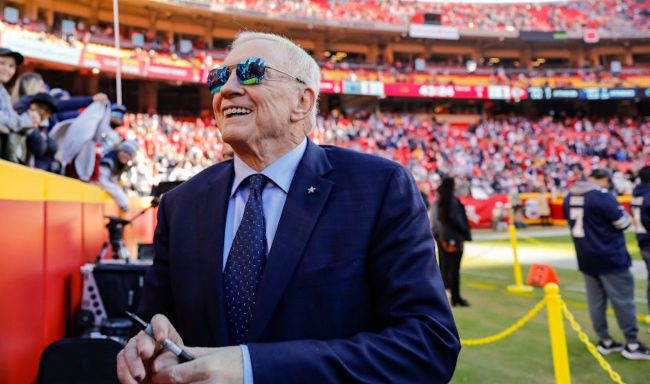 Jerry Jones, the famously outspoken owner of the Dallas Cowboys, recently shared his thoughts about Brian Flores’ lawsuit against the National Football League. Flores, the former Miami Dolphins head coach who was fired after the 2021 season, alleges in his lawsuit that he’s experienced racism during the league’s hiring process.

The most damning allegation includes alleged texts from New England Patriots head coach Bill Belichick, who seemingly revealed that Brian Daboll had landed the New York Giants head coaching job despite the fact that Flores was scheduled to interview for the role days later.

On Wednesday, while attending Senior Bowl practice, Jones addressed Flores’ allegations and said that the NFL “can do better.”

“I can see it’s an area, one of many, that we can do better. The area has some good attention. This is obvious if you look through that the league and coaches are trying to improve there,” Jones told reporters.

“I think the fact that it’s an issue shows not only the league’s willingness to address and do better. I think the fact that it’s being discussed as to how the Rooney Rule or what drives the Rooney Rule could be better. In the case of coach Flores’ complaint, he’s saying it could be better and the processes create positive result for the league” [via USA Today]

During the history of the Dallas Cowboys franchise, they’ve employed nine head coaches. Every single one of them has been a white man. Over that same time span, the team has employed 13 offensive coordinators — only one of them, Maurice Carthon from 2003 to 2004, was black.

Similarly, the Cowboys franchise has employed 11 defensive coordinators in their history, with only one of them — Brian Stewart from 2007 to 2008 — being black. Until that changes, Jones’ comments are simply hollow posturing.