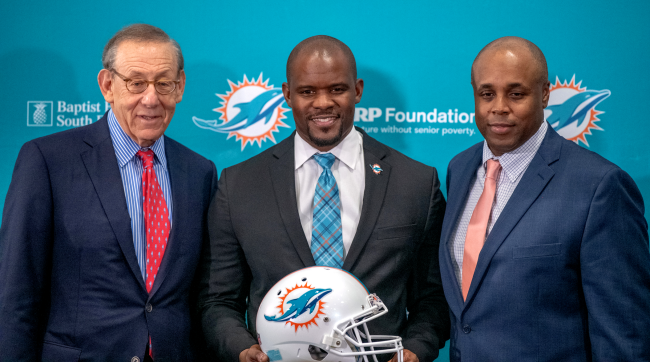 Former Miami Dolphins head coach Brian Flores has accused the team’s owner Stephen Ross of offering to pay him to lose games during the 2019 season.

In Flores’ lawsuit against the NFL, he says Ross offered him $100,000 for every loss during that season.

The lawsuit also states that “the team’s General Manager, Chris Grier, told Mr. Flores that “Steve” was “mad” that Mr. Flores’ success in winning games that year was “compromising [the team’s] draft position.”

During an appearance on ESPN’s Get Up Wednesday morning, Flores reasserted his claim that Ross had offered him a large payment to lose games in 2019. He also stated that he was never going to do it.

“If you’ve been in an NFL building, everyone works hard and tries to get on the same page and move in the same direction. I felt like we were building that type of culture. I would never do that to them.”

Flores also stated on Wednesday during his Get Up interview, “That was a conversation about not doing as much as we needed to do in order to win football games. Take a flight, go on vacation, I’ll give you $100,000 per loss — those were his exact words. I deal in truth, I tell the players this, as well. I’m gonna give you good news, bad news, but it’s going to be honest.”

“With regards to the allegations being made by Brian Flores, I am a man or honor and integrity and cannot let them stand without responding,” Ross stated.

“I take great personal exception to these malicious attacks, and the truth must be known. His allegations are false, malicious and defamatory.

“We understand there are media reports stating that the NFL intends to investigate his claims, and we will cooperate fully. I welcome that investigation and I am eager to defend my personal integrity, and the integrity and values of the entire Miami Dolphins organization, from these baseless, unfair and disparaging claims.”

Many NFL fans on social media, as usual, had a lot of opinions, not all of them serious, about the situation and shared them with the world.

Bank on the Dolphins having receipts showing why Flores was fired. This will get ugly.

Ross: (wipes his hard drives and has cyber espionage team audit his email and text and delete any disparaging messages) THIS IS NOT TRUE!!

“With regards to the allegations being made by Brian Flores, I am a man of honor and integrity as there’s a drive into deep left field by Castellanos and that’ll be a home run, and so that’ll make it a 4-0 ballgame.”

“I am a man of honor and integrity” pic.twitter.com/oBXg98YgAn

Sounds like the dirty laundry you hear about in a nasty divorce. There's probably three sides to this story. Look forward to hearing the truth.

If that’s the case, Brian Flores might be in for a world of hurt based on the Dolphins owner’s previous life experience.