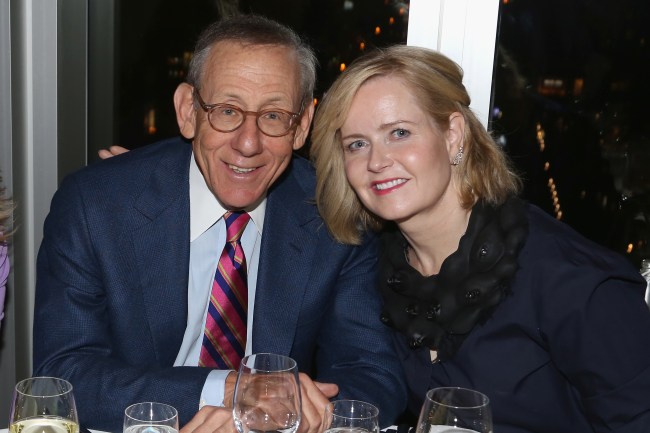 If there’s one thing in life you can set your watch to, it’s that money can make people lose themselves.

We saw it with Kelly Clarkson’s ex reportedly asking $436,000 a MONTH in their divorce settlement. We’ve seen it consistently in the ugly unravellings of the Dr. Dre / Nicole Young split. Hell, Larry King still making statements beyond the grave, after it was revealed that he wrote a secret will completely omitting his ex-wife.

There are multiple commas on the line in the latest public divorce between billionaire Miami Dolphins owner Stephen M. Ross and jewelry designer, Kara Gaffney.

The 80-year-old Ross, a real estate mogul and the developer behind NYC’s Hudson Yards, is worth an estimated $7-$8 billion, which will surely be diminished when he legally splits with his 54-year-old ex-wife-to-be. The pair married 18 years ago and have two children each from other relationships.

The former couple confirmed their split in a joint statement to Page Six: “We have deep love and respect for each other. We will continue to be a part of each other’s lives and support what is best for the health and happiness of our family.”

A legal source not involved in the Ross case speculated the divorce settlement Kara could win “could likely start at $100 million and go north to $200 or $300 million — making this one of the most expensive divorces in New York.”

The pair shares a penthouse on the 92nd floor of the Time Warner Center overlooking Central Park that was featured in Architectural Digest in 2015 and is currently on the market for $62.5 million, down more than $10 million from its original listing price in 2019.

Developer and Miami Dolphins owner Stephen Ross and his wife, jewelry designer Kara Ross, are listing their penthouse on the southwest corner of Central Park for $75 million. https://t.co/sBeR6nYbGD pic.twitter.com/IMlzK0VLBV

There’s also a 10,000-square-foot mansion in Southampton and their Palm Beach, Fla., oceanfront mansion, known as “The Reef,” an architectural gem for which Ross reportedly paid $31.8 million in 2008.

While the two claim the break is amicable, they’ve both lawyered up with the most high profile attorneys this country has to offer. Ross is being represented by William D. Zabel, whose famous clients have included George Soros, Greg Norman and Howard Stern, and Kara employed Judith Poller, who’s done dealings for Drew Barrymore and Scarlett Johansson.

Best of luck to the unhappy couple.