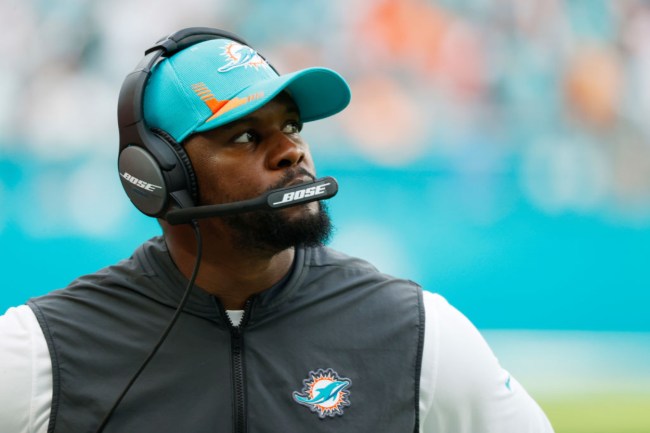 The Miami Dolphins’ decision to fire head coach Brian Flores this offseason was shocking. Flores helped lead the Dolphins to wins in eight of their last nine games of the regular season before finishing 9-8 on the year. It certainly felt like things were heading in the right direction in Miami with Flores at the helm.

Something didn’t exactly add up with Flores’ firing.

Flores has recently filed a lawsuit against the NFL and the Dolphins as well as the Denver Broncos and New York Giants. The lawsuit details serious allegations involving Dolphins owner Stephen Ross.

The lawsuit, which you can read the filing here, alleges racism toward Flores by the NFL and the Giants during their process of hiring a new head coach. The suit also contains alleged screenshots of text messages from Patriots head coach Bill Belichick mistaking Flores for Brian Daboll, New York’s newest head coach.

Flores and his lawyers also allege that Ross offered to pay the then head coach $100,000 for every loss during the 2019 season, which was Flores’ first in Miami. The Dolphins went 5-11 that season and drafted quarterback Tua Tagovailoa ahead of the 2020 campaign.

“In January 2022, Mr. Flores, who spent three years as the Head Coach of Defendant Miami Dolphins, Ltd. (the “Dolphins” or “Miami”), found himself without a job,” the filing reads. “He was fired by the Dolphins after leading the team to its first back-to-back winning seasons since 2003. The purported basis for his termination was alleged poor collaboration.”

“In reality, the writing had been on the wall since Mr. Flores’ first season as Head Coach of the Dolphins, when he refused his owner’s directive to “tank” for the first pick in the draft.”

It’s no secret that NFL teams have purposefully tanked in the past, but allegations of being paid six figures to lose games on purpose is something on an entirely different level.

The suit also alleges that Ross pressured Flores to “recruit a prominent quarterback in violation of League tampering rules.”

At the time of this writing, the Dolphins have yet to hire a new head coach and Flores has not been hired by another NFL team.