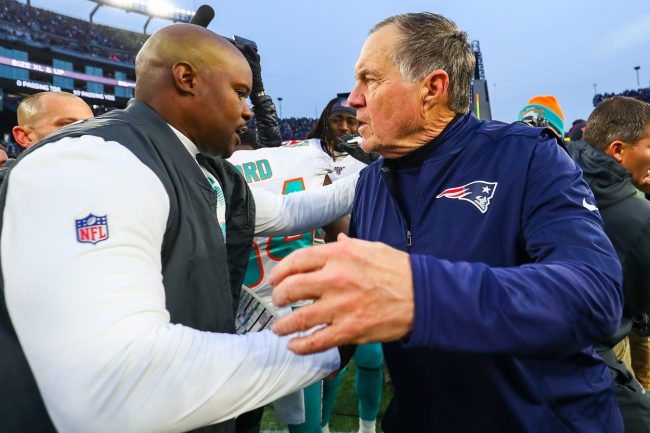 Brian Flores has filed a lawsuit against the National Football League, the New York Giants, the Miami Dolphins and the Denver Broncos, among other organizations. The class action complaint, filed in the Southern District of New York on Tuesday, alleges that his interview with the Giants was a sham.

Flores, who was fired by the Dolphins on January 10th, was one of the biggest names in the NFL coaching cycle. He is also a person of color.

The lawsuit, which was released on the first day of Black History Month, claims that the Giants only interviewed him because of the color of his skin. It opens by quoting Dr. Martin Luther King Jr.:

“Morals cannot be legislated, but behavior can be regulated. The law cannot make an employer love me, but it can keep him from refusing to hire me because of the color of my skin.”

From there, it proceeds to state Flores’ case.

“It has been nearly 20 years since the NFL implemented the Rooney Rule, purportedly to try to combat the utter lack of Black Head Coaches in the NFL. As first implemented, the Rooney Rule required NFL Teams to interview at least one Black person in connection with any Head Coach vacancy. The Rooney Rule has since been expanded to cover General Manager and other front office positions, as well as Assistant Head Coach and Coordinator positions. Moreover, as it relates to Head Coach positions, teams are now required to interview two minority coaching candidates, at least one of whom must be interviewed in person.”

In regard to the rule, it discusses his recent interview with the New York Giants.

According to the lawsuit, Flores’ interview was fiction and was simply meant to meet the requirements of the Rooney Rule. His allegations include a series of texts with Patriots head coach Bill Belichick, for whom Flores served under in New England from 2008 to 2018.

The complaint alleges that the Giants had already offered the job to Brian Daboll, who was eventually named their new head coach, before the team had even interviewed Flores. As a result, he was forced to take an interview with knowledge that the job was not his.

Belichick texted Flores, congratulating him on the job. However, Flores had yet to interview with New York at the time of the text.

From there, Belichick says that he heard from both the Buffalo Bills and the Giants that “you” are their guy. The “you” that Belichick was referring to was Daboll, not Flores. Belichick had them confused.

When Flores pushed back, asking if Belichick was texting him or Daboll, Belichick admitted that he messed up. He was mistaken as to which Brian was getting the Giants job.

A few days later, Flores interviewed with the Giants. He did not get the job.

Now, he is alleging that New York only interviewed him to meet the diversity requirement. His case is quite compelling.

In addition to the allegations against New York, he claims that the Dolphins once tried to pay him to lose. You can read the full lawsuit HERE.