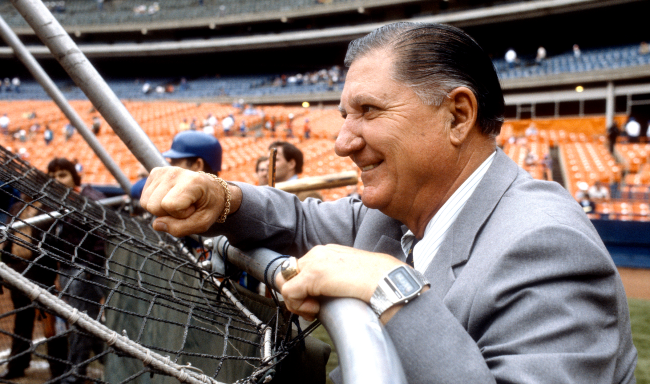 Among the many damning allegations being made by former Miami Dolphins coach Brian Flores over the past two days is one that claims the New York Giants only interviewed him for their head coaching job because of the color of his skin.

Flores, in his lawsuit against the Giants, Dolphins, Broncos, and the NFL’s 29 other teams, also blasted the league’s Rooney Rule, which Flores states was “purportedly to try to combat the utter lack of Black Head Coaches in the NFL” and has “since been expanded to cover General Manager and other front office positions, as well as Assistant Head Coach and Coordinator positions.”

It is his assertion that many of the interviews conducted by NFL teams are merely window dressing to satisfy the rule.

The resulting discussion about Brian Flores’ allegations have revived another infamous moment in sports history surrounding race and the attitudes of professional sports organizations towards the hiring of people of color in key positions.

Campanis was asked by Koppel during the live interview why there had been so few black managers and no black general managers or owners in Major League Baseball yet.

His response will live in sports infamy.

“Well, Mr. Koppel, there have been some black managers, but I really can’t answer that question directly,” said Campanis, who at one point had actually roomed with Jackie Robinson. “The only thing I can say is that you have to pay your dues when you become a manager. Generally, you have to go to minor leagues. There’s not very much pay involved, and some of the better known black players have been able to get into other fields and make a pretty good living in that way.”

Koppel responded by saying “that’s a lot of baloney” and said to Campanis, “Just tell me, why you think it is. Is there still that much prejudice in baseball today?”

“No, I don’t believe it’s prejudice,” Campanis replied. “I truly believe that they may not have some of the necessities to be, let’s say, a field manager, or perhaps a general manager.”

When pressed by Koppel, who was stunned by the answer, and offering him a way out, Campanis doubled down, adding, “Why are black men or black people not good swimmers? Because they don’t have the buoyancy.”

Again, Koppel asked him to clarify his remarks, because he couldn’t believe what he was hearing. It didn’t work.

Campanis went on to tell Koppel, “Well, I don’t say that all of them, but they certainly are short. How many quarterbacks do you have? How many pitchers do you have that are black?”

It only got worse from there.

One of the seminal moments of my teenage years. Not sure I’d ever seen my Jackie Robinson-Dodgers-loving father so mad. He told me the next day that he’d watched this interview live and thought he was having a bad dream so he kept walking around the room, trying to wake up. https://t.co/tOL9DzZ5Ik

He was fired by the Dodgers shortly after the interview.

Koppel’s interview with Campanis has now been discovered by a whole new audience thanks to the Brian Flores situation and people are gobsmacked.

This is insane. I know it's an old video but it's absolutely ridiculous 💯 The color of someone's skin and their race has nothing to do with what they are capable of. We need to start embracing #diversity and #inclusion throughout the world

Koppel called it out quick!

And the lesson they learned that day was to stop going on tv.

These is how half of the NFL owners think.

The amount of progress from this video… pic.twitter.com/Ax2RgyHWxz

Brian Flores may not ever get another NFL head coaching job, which would be a shame, but as he told CBS Mornings on Wednesday, “This is much bigger than coaching.”