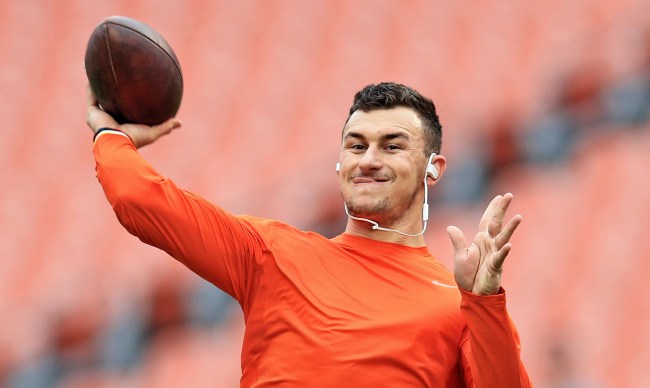 Johnny Manziel’s NFL playing days are likely a thing of the past, as the former 22nd overall pick signed a Canadian Football League contract last week with the Hamilton Tiger-Cats. The 25-year-old Heisman Trophy winner is one of five quarterbacks on the team’s roster and is expected to backup Jeremiah Masoli for the entire upcoming season, who last year completed 64 percent of his passes for 3,177 yards, 15 touchdowns and five interceptions.

Manziel’s former NFL team chose a fiery undersized quarterback who many compare to him ad nauseam, and it’s hard to imagine it doesn’t sting a bit for Johnny. But even if he’s feeling some envy, he’s demonstrating character and support for Mayfield.

When asked by Dan Patrick what advice he has for Mayfield, here’s what Manziel had to say:

“I feel like Baker’s in a better situation, having a vet quarterback in there in Tyrod [Taylor]. There’s not pressure on him to come in and start Day 1, and I think he’s going to go into it and he’s going to learn from the vets. It hurts when you don’t have a guy like Joe Thomas on the O-line, because once I started to get to know Joe and started to pick his brain, I really started to learn a lot of stuff.

He’s got good people around him, he’s got a great group of receivers. And trust in those guys they have around him. That would be my advice to him. Baker’s got the fire, Baker’s got the spark, and I think he’ll do alright. But don’t let the pressure of everything else that goes on get to you. Just go out and make football the main thing.”