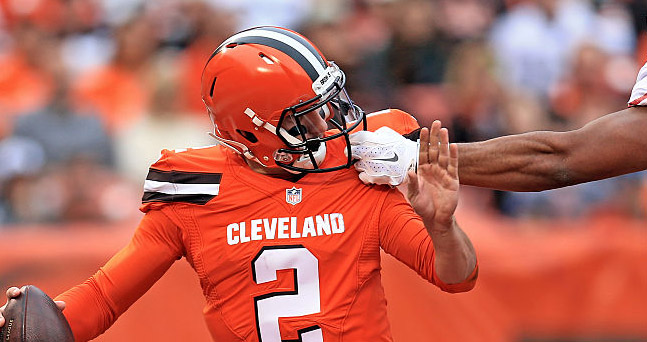 Despite making a mint hawking swag promoting his “ComebackSZN” and selling the public on it via videos of him working out, with Odell Beckham, Jr. no less, Johnny Manziel still doesn’t have a team to actually play football with yet.

That’s because Manziel thinks he should not only be paid starter money by the Canadian Football League’s Hamilton Tiger-Cats, he wants to be paid star money to play quarterback for the team.

Having made contract demands and setting an arbitrary deadline of January 31st, Manziel’s agent Erik Burkhart previously stated, “If we cannot reach a deal with Hamilton by this date we will turn our focus to several other professional options readily available to us.”

Not sure what those “several other professional options” could possibly be? The Arena League? The Indoor Football League? Are those still in existence? Even if they are they don’t pay anything and the XFL, where he may or may not be eligible to play, isn’t going to get going for at least a couple more years. Surely, Burkhardt isn’t referring to the NFL, right?

Johnny Manziel and the Hamilton Tiger-Cats are far apart as negotiations continue between the CFL club and the former NFL quarterback.

According to TSN’s Farhan Lalji, Hamilton offered Manziel a contract in the range of $150,000 with some minor incentives earlier this month, but Manziel’s camp was looking for an offer in the range of $500,000.

The Ticats offered Manziel a two-year contract on Jan. 7 and the 25-year-old and his agent Eric Burkhardt countered by telling the team that they had until Jan. 31 to improve their offer.

The Tiger-Cats did, however, issue a statement that says the deal is not completely dead yet, according to ESPN.

“While the discussions with Johnny Manziel and his representative have been very cordial and informative,” the statement read, “there is nothing imminent and nothing to report. We will continue to do our due diligence and will have no further public comment on the matter as we move forward.”

For his part, Manziel doesn’t seem all that concerned about it.

JFF, still as cocky as ever.