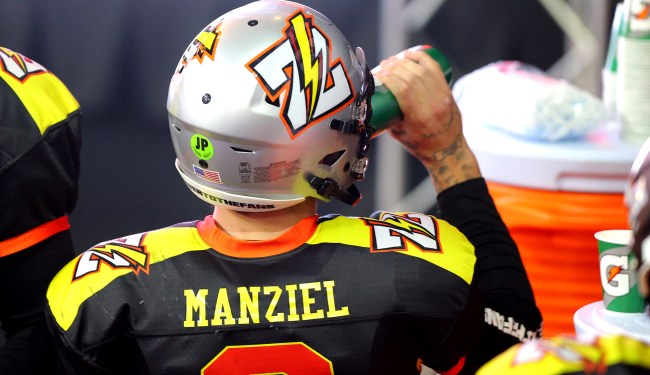 Johnny Manziel may currently be playing in the Fan Controlled Football League for the, hold on… the Zappers, but he says his real plan is to become a professional golfer.

The 28-year-old former quarterback of the Cleveland Browns, Hamilton Tiger-Cats, Montreal Alouettes, and Memphis Express dropped this bit of career news during a recent appearance on the Green Light with Chris Long podcast.

First off, Manziel compared playing in the Fan Controlled Football League to being like Uncle Rico in Napoleon Dynamite.

“You guys need an intramural quarterback, I got you,” said Manziel.

He also claims he is in the new league in large part because he lost a bet playing cards, and says he is like the Jackie Moon of the FCF since he also has a little bit of ownership in the team and does a little coaching.

As for golfing, Manziel says he is a zero or a one handicap.

“I’m giving myself 12 years to try to play professional golf,” Manziel told Chris Long on the podcast. “I’m gonna grind this out and see how good I can get and see if I can’t enter some tournaments and see if I can’t go try and play professional golf eventually. I think it is a very uphill battle, but that’s what I’m setting for my goals. I have 12 years to try and make a PGA Tour event.”

What, exactly, Manziel is going to do to make a living and support himself during those 12 years was not discussed.