Johnny Manziel Trademarks ‘COMEBACKSZN’ For Apparel, Still Unclear When His Own Comebackszn Will Begin 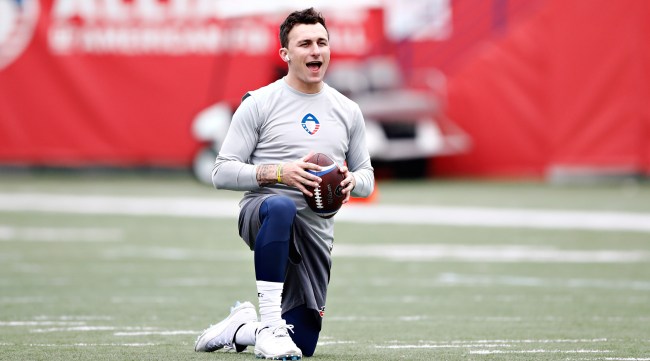 It’s always a good day when Johnny Manziel is making news. Yes, his football career is likely over, but the guy is still an electric factory, and you can’t deny that even if you hate him. His 2012 Heisman Trophy-winning season has given him at minimum a decade to have some shrivel of space in the brains of college football fans, so we’ve got a little over two years left on that lease.

Manziel is now the proud owner of the trademark ‘COMEBACKSZN,’ that is the news.

For those that haven’t kept up with Manziel over the past few years – how dare you by the way – the term has been his unofficial trademark through his up and downs in life and on the field and now the term is officially his. He was granted registration for the trademark by the U.S. Patent and Trademark Office on Oct. 8, according to attorney Darren Heitner.

I’ve always loved Johnny Manziel’s mission with “COMEBACKSZN.” He said it is for anyone who has been hurt, down & out. Staring the adversity dead in the face, admitting their wrongs & pressing forward with a vengeance.

Honored to have helped with registering the trademark. pic.twitter.com/sRvGvBNdwJ

As you can tell by the listed description, Manziel plans to use the term for a clothing line. From jackets, to shorts to footwear he’s looking to make some coin on some apparel with his phrase on it. You can’t hate the hustle, either. He previously sold some unofficial apparel with the phrase, but now it’s officially official.

Manziel already has the website up and running, but at the moment it’s password protected. One can assume he’s just waiting to get some products up online before officially launching the site.

Manziel’s most recent comeback attempt was with the Memphis Express of the Alliance of American Football, but the league ceased operations back in April.

COMEBACKSZN is the 26-year-old’s second trademark as he also holds the rights to ‘Johnny Football.’