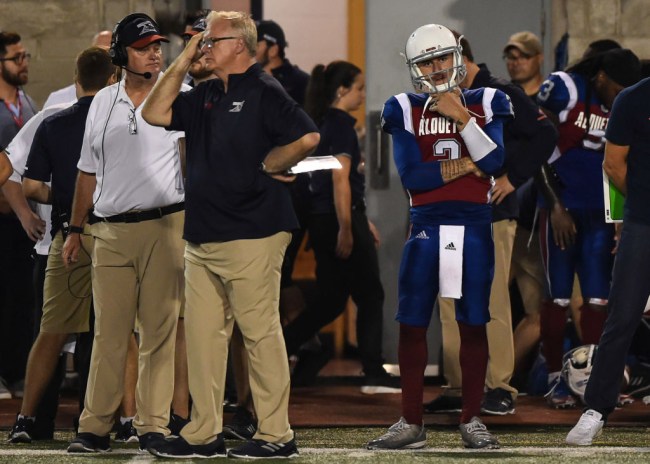 Johnny Manziel suffered a concussion in the Montreal Alouettes 24-17 loss to Ottawa on August 11th. He’s been cleared to play, however, for the past two weeks. But he hasn’t. And he doesn’t understand why.

“If the club had faith in me, I feel like I would be the guy, I feel like I would’ve been the guy after I came back from the concussion,” said Manziel to the media on Thursday, reports SportsNet. “That hasn’t happened, so I need to continue to get out here. And it’s the hardest part about missing practice, I need these reps to try to leave as little doubt as possible in my ability to play.”

The Alouettes currently sit at 3-8 and while the coach Mike Sherman also coached Manziel at Texas A&M, he didn’t sound like Johnny Football, who missed the last two days of practice with the flu, was going to be getting any playing time this week either.

“Seems like he’s doing better, so we’ll evaluate him a little bit more,” said Sherman. “I really haven’t even talked to the trainers about him other than the fact they gave him IVs yesterday at the doctors, and he’s feeling much better today.”

Manziel, who has started two games for the Alouettes this season, both losses, has completed 27 of 46 passes for 272 yards and four interceptions, no TDs.

Current starter Antonio Pipkin is now is 2-1 as the starting QB with wins in the last two games, throwing for 762 yards with a TD and four interceptions plus 127 yards and four TDs on the ground.

“That’s where maybe it’s a little bit lost on me, because I felt like I was brought in here to be a piece, had a lot of faith in me the first couple of weeks I was here … since I missed the games because of the concussion and then not getting to play once I was back has been frustrating for sure, because I felt like there was a lot of hope, and a lot of faith in me being the guy here,” Manziel continued. “How quickly that’s changed in two weeks is tough.”

Despite his confusion and disappointment, Manziel says he’s still a etam player.