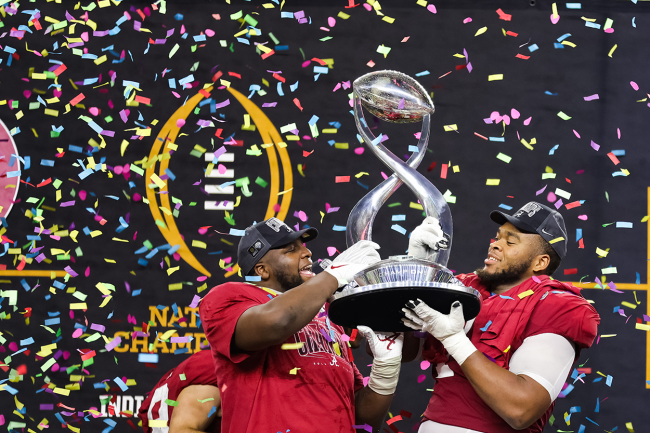 Four-star wide receiver recruit Johntay Cook has been on a search for trophies over the course of the last few weeks. He finally found some this past weekend.

Cook, a Class of 2023 recruit from Desoto, Texas, is considered one of the top slot receivers in the nation. He has offers from more than 20 schools, but his decision seems to be down to three.

Cook released a top-seven back in December and the list included Alabama, Clemson, LSU, Ole Miss, Ohio State, Texas and Texas A&M. More than likely, he will end up at either of the in-state programs or with the Crimson Tide.

As Alabama hosted its annual A-Day on Saturday, Cook was in attendance.

While on campus in Tuscaloosa, Cook went searching for something he had not found at other schools. He wanted to find football trophies.

Cook did not hold back on either program and took shots at them both.

Upon arrival at Alabama, that was not the case. Johntay Cook finally found football trophies.

Not only was Cook impressed by the amount of trophies, he was thrilled to come across trophies from recent success.

Will Cook follow the trophies? That is yet to be determined.

You can find his full Alabama visit recap here: