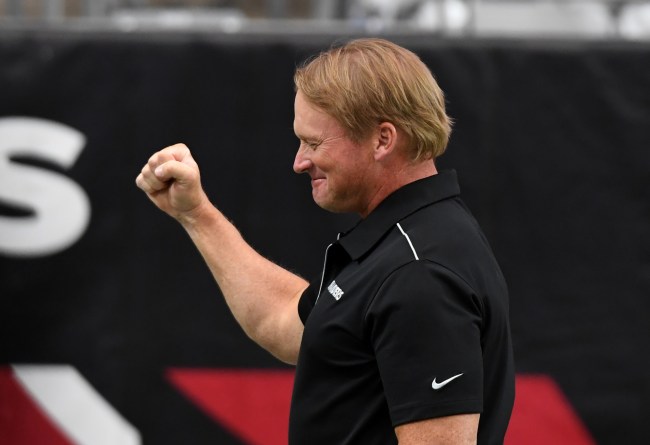 Tonight’s episode of ‘Hard Knocks” was mostly dedicated to Antonio Brown’s arrival at camp while dealing with the helmet saga and foot injury othat has kept him off the field.

Despite all the drama, it seems like AB and head coach Jon Gruden are getting along pretty well.

Gruden, doesn’t think the helmet issue is a big deal, and applauds Brown for sticking up for himself.

I give the guy credit for standing up for what he believes in. Everybody else does in this country

Brown was appreciative of Gruden’s support during the turmoil and thanked him for it.

Thanks for supporting me coach, my fucking head, the feet, people after me, you’ve been a constant supporter, thank you

Gruden did get some jokes in at Brown’s expense in the episode. While celebrating a touchdown during the Raiders preseason game, Gruden yelled “you can use my helmet” at Brown on the sideline.

Jon Gruden to Antonio Brown "You can use my helmet" 😂😂pic.twitter.com/7by4DBREcu

Gruden would later crack a cryotherapy joke when Brown was describing how badly his feet burned.

Antonio Brown "My Feet are burning"

Jon Gruden "Why don't you go to a cryochamber"

We’ll see how long this bromance between Gruden and Brown lasts.