Jon Gruden Saw Antonio Brown’s Hype Video Before It Was Posted Online, Said He ‘Loved It’ And Gave Brown Permission To Share It 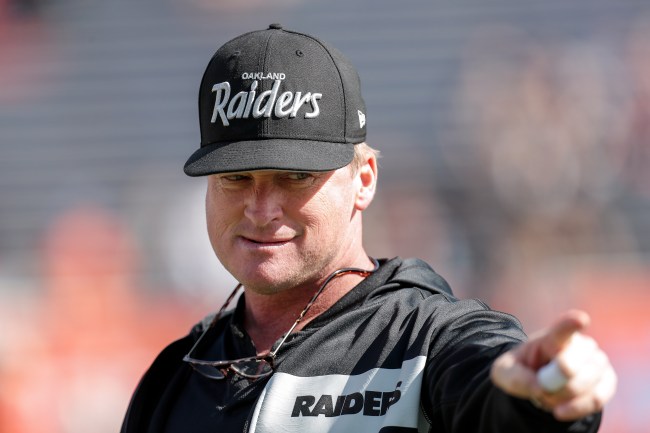 Over the weekend, Brown posted this insane hype video that featured a private conversation he had with Jon Gruden about all the drama going on in Oakland.

At the time several people noted how Brown secretly recording Gruden could get him in trouble with the law.

I HIGHLY doubt Gruden agreed to be recorded by Brown and California is a two-party consent state. pic.twitter.com/J07t6ypqu5

illegally recording a phone conversation in California carries a maximum 1-year jail sentence … which could be a BIG problem for Antonio Brown if Jon Gruden wants to stick it to the WR.

It’s all spelled out in California Penal Code 632 — an invasion of privacy statute that essentially forbids the recording of a conversation without the knowledge/consent of both parties.

If convicted, it carries a maximum 1-year jail sentence, $2,500 in fines and other penalties.

Today, AntoniO Brown’s video producer Alejandro Narciso told Dan LeBatard that not only did Gruden allow Brown to post the video but that he said that he “loved it”.

On @LeBatardShow, the producer of Antonio Brown’s hype video confirmed Jon Gruden approved the use of their phone conversation in video before it was released on social media #Raiders

Hopefully, this will finally shut all the Twitter lawyers up for a bit.