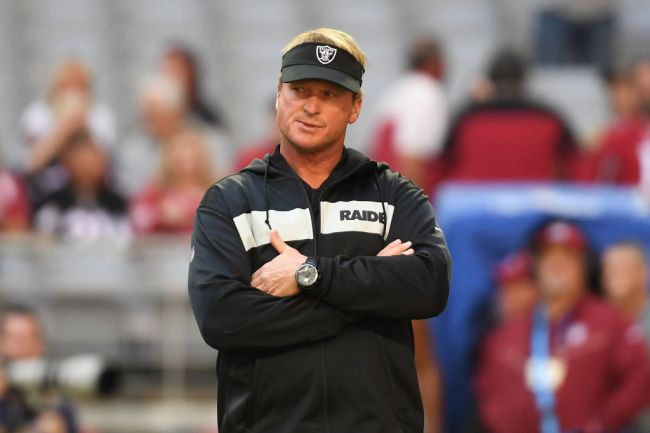 The Las Vegas Raiders welcome the Saints to town on Monday night for what will be their first-ever home game inside their brand new Allegiant Stadium. With its unique all-black exterior, the stadium took on the nickname the ‘Death Star’ almost immediately and the team has since adopted the nickname full force.

Prior to a scrimmage inside the stadium back in August, team owner Mark Davis gave a speech and began by saying “Welcome to the Death Star, where our opponents’ dreams come to die.” Head coach Jon Gruden is very much on board with the nickname as well, but wants it known that he doesn’t give a damn about ‘Star Wars.’

“I think it’s a cool name for our stadium,” Gruden told the Las Vegas Review-Journal. “I don’t give a damn about Star Wars. That’s what we’re calling our stadium and I don’t care what anybody else thinks. It’s a cool stadium, it’s a great name and we just have to play good when we’re in there.”

Ok, Jon, we get it, it’s a cool name and you don’t care about the movie.

For others out there like Gruden that doesn’t give a damn about ‘Star Wars’ – me, I’m one of those people – the ‘Death Star’ may not actually be the best of nicknames. Sure, it sounds cool and intimidating, but it was blown up not once, but twice in the movies.

‘Star Wars’ fans were quick to remind Gruden and the Raiders about that fact.

I reminded #Raiders owner Mark Davis that the Death Star
of @starwars was blown up, not once, but twice (three times if you count 'Starkiller Base'). He laughed and said, "Yeah, that was THEIR Death Star. Not ours. Ours was built to sustain." @DeathStarPR https://t.co/a5yJIRERzr

I know a team with a Space Commander who will blow that s*** up! pic.twitter.com/RrRF6r1Czx

EVERY SINGLE PERSON ALIVE UNDER 45: “PFFFFFFFT… who is this dork?”