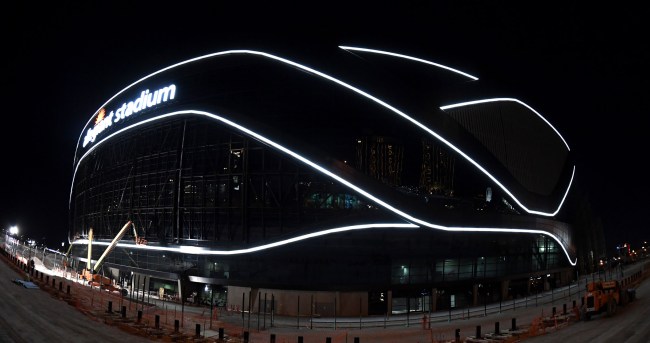 The Las Vegas Raiders’ new stadium in Sin City is quickly becoming a destination location. It is one of the main reasons the Raiders are the hottest selling ticket in the NFL.

The all black Allegiant Stadium has already earned the nickname The Death Star and the organization is rightfully, very excited to see it open when it hosts its first major event, a sold-out Garth Brooks concert, on August 22nd.

In fact, the Raiders organization is so excited that in an effort to hire the 4,500 part-time employees they put together a hype video just for the stadium alone.

Don’t know about you, but after watching that I am about ready to put in an application even though I live hundreds of miles away from Las Vegas.

Allegiant Stadium is supposed to be mostly completed by July 31st with the Raiders hosting their very first game in Las Vegas, a preseason matchup on August 27th against the Arizona Cardinals, followed by a UNLV football game on August 29th.

In related, Las Vegas Raiders news, it is being reported by the Las Vegas Review-Journal that Elon Musk’s Tesla-based underground people-mover system could be used to link the Las Vegas Convention Center and Raiders’ new stadium as early as 2021.

Having the system link the convention center and the resort corridor would open up a plethora of parking options for those looking to attend events at the stadium, which has limited on-site parking.

“For example, you can get from here (convention center) to the stadium in about 4½ minutes,” [Steve Hill, Las Vegas Convention and Visitors Authority CEO] said. “That’s going to make game-day experience for everybody in that corridor much easier. If you want you could come park here and go to the stadium and it also ties all the parking garages up and down the Strip together.

“So, you can park anywhere and get someplace fast.”

Chalk up yet one more reason for fans to want to make the trek to Las Vegas for a Raiders game.