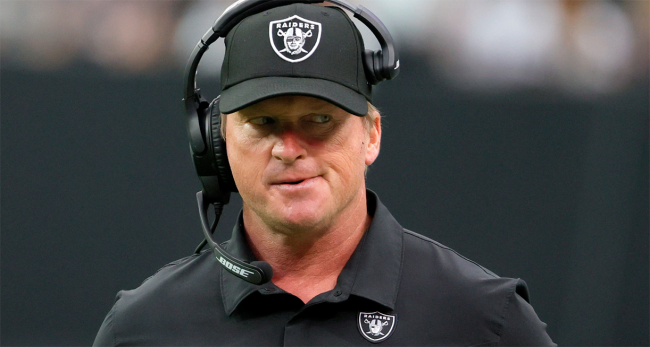 Count Jon Gruden and his layers among the many people that are interested in the testimony of NFL commissioner Roger Goodell at Wednesday’s House Oversight Committee hearing.

The former Raiders head coach filed a lawsuit in November 2021 against the NFL for what he called “a malicious and orchestrated campaign” to destroy his career, including any endorsement contracts.

Gruden was fired with more than six seasons remaining on his 10 year, $100 million contract with the Raiders after Goodell and the NFL allegedly leaked numerous racist, misogynistic and homophobic emails written by Gruden to the media.

On Wednesday, after watching the NFL commissioner being questioned by Congress, Gruden’s attorney Adam Hosmer-Henner issued a statement.

“It was apparent from Commissioner Goodell’s testimony today that the NFL is still resisting actual accountability and is only willing to be selectively transparent,” said the attorney. “In the Jon Gruden lawsuit, the Nevada court comprehensively rejected the NFL and Commissioner Goodell’s attempt to compel arbitration and conceal their conduct from the public. If they do appeal, we welcome the opportunity for the Nevada Supreme Court to issue a published opinion confirming the ruling and invalidating the NFL Constitution and the unfair arbitration provisions that the NFL has hidden behind for so long. Jon Gruden’s fight matters to many more people than just himself and real accountability won’t exist until the NFL’s misconduct stops being addressed behind closed doors.”

Gruden has never denied writing and sending the emails, but does claim that the NFL intentionally leaked them as some sort of distraction tactic to draw attention away from the league’s controversial investigation into the Washington Commanders organization.

Many NFL fans, upset with the whole situation involving Gruden, Goodell and the Washington Commanders expressed their displeasure on social media.

Snyder should be in jail for the rest of his life but if you believe gruden is fighting for anything I don’t know what to tell u.

yeah. gruden is a pos but it’s weird that a raiders coach was singled out in thousands of washington emails

Grudens fight for what? The right to be a racist and not get fired by a private employer???

The backlash of only putting Gruden's dirt in the streets is coming back to haunt the NFL. They gotta settle cause no telling what the NFL is actually covering up, just like they had to pay Kap. Owners are the worst. https://t.co/EBBBrbq0Ec

They should televise the Johnny Gruden trial like they did the Johnny Depp trial.. show the NFL hit job on our Raiders and Gruden..