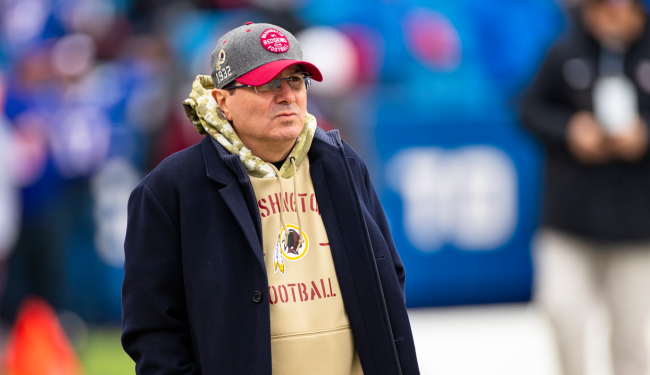 Prior to NFL commissioner Roger Goodell’s appearance at Wednesday’s hearing of the U.S. House Committee on Oversight & Reform, the committee released a 29 page memo which claims Daniel Snyder used a “shadow investigation” to discredit his accusers and blame others for his misdeeds.

The memo, which was presented at the beginning of the hearing by House Oversight Committee Chairwoman Carolyn Maloney, claims Snyder’s legal team created a “100-slide dossier with emails, text messages, telephone records, and social media posts from journalists, victims, and witnesses who had made credible public accusations of harassment against the Commanders.”

The “shadow investigation” was allegedly used to bury the findings of an official internal investigation and place much of the blame on former team president Bruce Allen, reports ESPN.

Among other allegations described in the memo, the committee’s eight-month investigation found evidence that Snyder used subpoena authority available to parties involved in overseas lawsuits to obtain correspondence from former president Bruce Allen and other former employees. The goal, according to the memo, was to build a case to the NFL that Allen was to blame for the team’s toxic workplace environment, and that former employees were conspiring to disparage Snyder.

The committee says Snyder used a common-interest agreement between the Commanders and the NFL to “attempt to steer the direction” of the independent investigation into the team led by attorney Beth Wilkinson and to discredit the people accusing him, including those cited in reports published by The Washington Post, by providing the NFL and Wilkinson with “derogatory information about them.”

Daniel Snyder will be subpoenaed to appear before the Committee, says Chairwoman Carolyn Maloney

Snyder, who is currently in France, has been asked twice to appear before the Oversight Committee and has declined both times. Most recently, he claimed that he could not appear due to a “long-standing Commanders-related business conflict.”

“Rather than show up and take responsibility for his actions, he chose to skip town,” Maloney said on Wednesday. “Apparently, Mr. Snyder is in France, where he has docked his luxury yacht near a resort town. That should tell you just how much respect he has for women in the workplace.”

Maloney also stated on Wednesday, “The NFL is unwilling or unable to hold Mr. Snyder accountable. That is why I am announcing now my intent to issue a subpoena for Mr. Snyder for a deposition next week. The committee will not be deterred in its investigation into the Washington Commanders.”

Rep Maloney announces she's issuing a subpoena to force Dan Snyder to testify before congress next week after Roger Goodell says he's not responsible for Snyder not showing up today pic.twitter.com/2g4jfS25HJ

When asked if Snyder will be held accountable for not appearing before the Committee, Roger Goodell replied, “I do not have any responsibility for whether he appears before Congress.”

A spokesperson for Daniel Snyder said in a statement responding to the 29 page memo, “It is clear the outcome of the House Oversight Committee’s investigation into the Washington Commanders was predetermined from the beginning. The committee’s decision to release a ‘report’ and introduce legislation prior to the hearing is proof-positive this was always going to be little more than a politically-charged show trial, not about uncovering the truth. Hopefully, the committee will utilize its resources going forward for more pressing national matters, instead of an issue a football team addressed years ago.”

Fans following along with Wednesday’s hearing were more than happy to share their thoughts on social media.

This is absolutely insane but totally predictable. The Snyders must be held accountable & Roger Goodell has allowed this to happen under his watch. #releasethereport

Daniel Snyder will ultimately be forced to sell his football team in the near future. It’s not only fans who hate him. Anyone who has ever worked for him doesn’t come away with a single nice thing to say. Eventually that comes back to bite you. https://t.co/WuhX7r5si6

It's been said many times, but it's just staggering how poorly he has managed this franchise. If you told me 25 years ago that I would have zero emotional investment in this team, I never would have believed it, but here we are. Wake me up when he's gone.