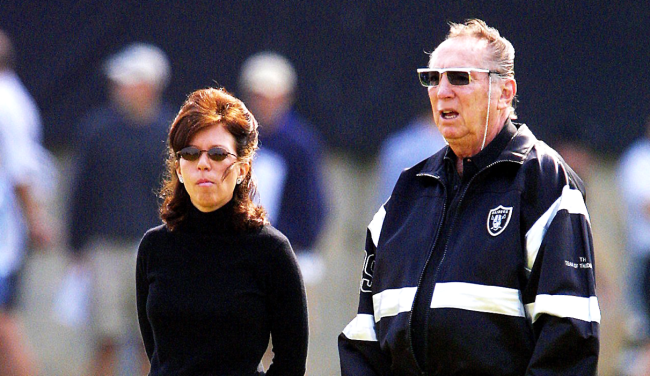 While Jon Gruden, and to some extent ESPN NFL reporter Adam Schefter, have been getting the brunt of the criticism for the emails leaked from a Washington Football Team investigation, the man who ran the organization, Bruce Allen, has unfortunately been largely ignored.

Allen was the person who was in charge of the Washington Football Team’s day-to-day operations during the time he was exchanging homophobic, misogynistic, and racist comments via email with Gruden and others.

From 1995 to 2003, Bruce Allen was also an executive with the Raiders and worked with Jon Gruden there, as well as later on in Tampa with the Buccaneers.

During his years with the Raiders, Allen worked under Amy Trask who was CEO of the Raiders from 1997 to 2013 and the first female CEO in NFL history.

On Sunday, Trask was asked to comment on Jon Gruden and her time with him while in Oakland.

“So, for that reason, I will share that I did hear comments of that nature from the individual to whom Jon [Gruden] sent those emails,” Trask added, referring to Bruce Allen. “And I did speak up. I spoke up repeatedly, I spoke up forcefully. I talked to the owner about it. Because to be silent would have been to be complicit.”

Amy Trask was then asked to comment on the fact that the Raiders had access to the offensive Jon Gruden emails for possibly over a week, or even longer, and yet still allowed him to coach the team against the Bears before firing him.

“One has to wonder, had those not been made public, what would the outcome been?” replied Trask.

From former Raiders president @AmyTrask: (1) she didn't interact much with Jon Gruden when they were both with Raiders, at his choice; (2) she never heard him say anything inappropriate; (3) she heard inappropriate comments from Bruce Allen, and she spoke up "repeatedly." https://t.co/YqQjxONOSL

Meanwhile, following the Raiders’ win over the Broncos on Sunday, Raiders owner Mark Davis finally broke his silence on the Jon Gruden situation.

“Listen, the Raiders stand for diversity, inclusion and social justice,” said Davis. “We always have and we always will. The emails that came out are not what we stand for and so Jon Gruden is no longer head coach. There’s not much more I can say. All the talking heads are making up all sorts of stuff. That’s all it is. We don’t stand for it.”

Davis is reportedly considering legal action against the NFL as he believes it was someone within the league office that leaked the emails to the Wall Street Journal and New York Times.