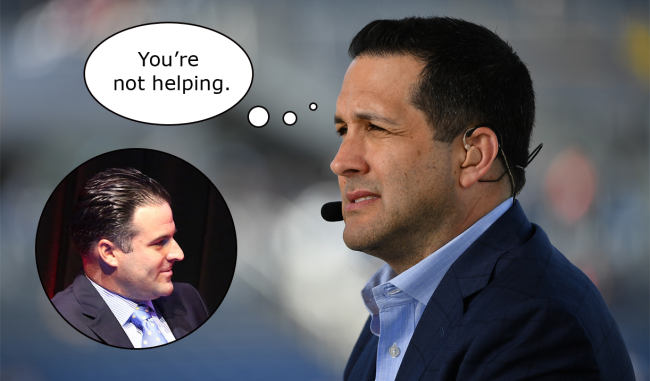 In addition to the numerous very problematic things revealed in emails to and from former Las Vegas Raiders head coach Jon Gruden, reportedly including illicit topless photos of WFT cheerleaders, ESPN’s Adam Schefter has now also gotten swept up in the controversy.

Tuesday night, the Los Angeles Times reported that in addition to the emails between Gruden and Bruce Allen, Adam Schefter also sent a questionable correspondence to the former Washington executive asking him if he wanted an unpublished story on the NFL’s CBA negotiations with the NFLPA to be “tweaked” to his liking.

ESPN quickly responded with a statement that read, “Without sharing all the specifics of the reporter’s process for a story from 10 years ago during the NFL lockout, we believe that nothing is more important to Adam and ESPN than providing fans the most accurate, fair and complete story.”

Schefter, however, did not respond until his Wednesday morning appearance on 97.5 The Fanatic.

“I’ve learned for a long time in this business not to discuss sources, or the process, or how stories are done,” said Schefter. “But I would just say that it’s a common practice to run information past sources. And in this particular case, during a labor intensive lockout that was a complicated subject that was new to understand. I took the extra rare step to run information past one of the people that I was talking to. You know, it was an important story to fans; a host of others, and that’s the situation.”

Naturally, Schefter has been under fire on numerous fronts, from fans to other journalists, but one person who has got his back apparently is professional internet troll/journalist Darren Rovell.

“Give me a break. While it’s not exactly the best of journalism practices, we’ve all done this in the name of accuracy,” Rovell tweeted Wednesday morning.

That hot take did not go over well with just about everyone on Twitter.

You've sent entire stories to subjects asking them if anything needed to be tweaked?

I have never once in my career as a journalist done this and I have repeatedly rebuffed requests to do this. We learned that this was a big no no in the first week of journalism school.

I've been a reporter and editor for 40 years and I've never done this, nor has any reporter I've managed. Give the subject of a story the first edit? Never, ever, ever. I'm stunned there's even a discussion about this.

Just because you have, apparently, doesn’t mean — <gestures to every reporter everywhere> — “we’ve all done this.” Come on, man.

It's true. Remember when I sent you this and you confirmed every word of it? https://t.co/YY2aqd1zDY

Rovell, feeling the heat of a thousand suns, quickly backtracked on his initial tweet.

Gonna clarify here because the mob is gonna mob.

No, I don’t think we as journalists have all sent full, unedited stories to sources and called them editor.

I think, at least most of us, myself included, have shown pieces of stories to sources. https://t.co/L5cmSzZoXT

Unfortunately for Rovell, despite his clarification, many people still weren’t having it.

That’s because you’re not a real journalist, never have been, and that blank, dazed, stupid, check-engine-light look in your eyes is the full and total expression of your soul. https://t.co/z6gXYTRgRS

Then why did you say "we've all done this". Did you not read the story?

Imagine blaming an imaginary “mob” because they took what you said literally. “We’ve all done this” became I didn’t do this pretty fast. Don’t blame the people for calling you out

Story: “Schefter actually sent Allen the full draft of a story that Schefter planned to publish, for Allen’s review and approval.”

Rovell responding to story: Give me a break, everyone does it.

Also Rovell: No not THAT

Because if I deleted it, the mob would come after me more? Don’t you know the rules of Twitter? https://t.co/1by6v0MUfw

As Rovell himself said, “the mob is gonna mob.” Way to insert yourself into a story that has nothing to do with you, Mr. Rovell. Then again, that’s what real journalists do, right?

UPDATE: Rovell deleted his original tweet and tweeted this…

It could have been written better.

Do I think most journalists check with the sources, sometimes even show them pieces of stories? Yes.

Do I think journalists show sources full unedited pieces & offer them to edit it as they see fit? No. pic.twitter.com/ntPg2JCtYy

There’s a lot to unpack here. But I’ll use this space to tell the story of how you called executives at ESPN, whining to try to get me to stop doing a story on how you were buying up all the Alex Gordon errors. Guess what happened? I wrote the story anyway. https://t.co/ZioWm7KLTz