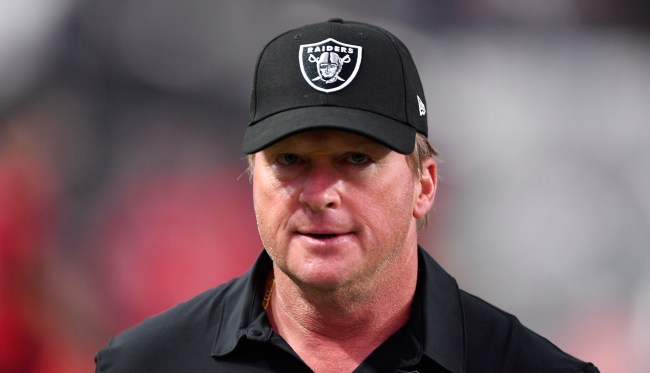 Among the many allegations levied at the now former head coach of the Las Vegas Raiders, Jon Gruden, one of the most disturbing details is related to a past calendar photo shoot for the Washington cheerleaders.

An “independent” NFL investigation looked into allegations of verbal abuse and sexual harassment, including a secretly produced explicit video of WFT cheerleaders allegedly created specifically for team owner Daniel Snyder, and well, nothing has really come of it.

Now, the New York Times bombshell report about Jon Gruden’s behavior in the early 2010s while working for ESPN has shed even more light on what the Washington Football Team cheerleaders had to endure during that time period.

“But Gruden’s behavior was not limited to 2011,” the report states. “Gruden exchanged emails with [WFT executive Bruce] Allen and other men that included photos of women wearing only bikini bottoms, including one photo of two Washington team cheerleaders.”

Gruden reportedly used his personal email account while Allen wrote from his team account during these exchanges.

A 2018 New York Times report stated, “For the photo shoot, at the adults-only Occidental Grand Papagayo resort on Culebra Bay, some of the cheerleaders said they were required to be topless, though the photographs used for the calendar would not show nudity. Others wore nothing but body paint. Given the resort’s secluded setting, such revealing poses would not have been a concern for the women — except that the Redskins had invited spectators.

“A contingent of sponsors and FedExField suite holders — all men — were granted up-close access to the photo shoots.”

In August of 2020, the Washington Post reported that the Washington Football Team “had produced lewd videos out of outtakes from the cheerleaders’ 2008 and 2010 swimsuit calendar shoots that include partial nudity.”

Then-senior vice president Larry Michael told broadcasting staffers to produce the videos, according to two ex-employees, one of whom said the footage was to be assembled for team owner Daniel Snyder. Snyder and Michael have denied any knowledge of the videos, copies of which were obtained by The Post.

The videos include clips during which some of the cheerleaders’ nipples are exposed as they shift positions or adjust props shielding their breasts. Two of the women’s pubic areas are obscured only partly by body paint.

Washington’s former cheerleading director Donald Wells also alleged that Snyder once told him, with regard to members of the squad, “You better keep them skinny with big t-ts or I’ll f—ing kill you.”

In 2009, [former cheerleader Michelle] Moseley and three other cheerleaders were headed to a casino with season ticket holders and sponsors during a Super Bowl trip to Tampa, she said, when Dennis Greene, then-president of business operations, proposed a change in plans. He told two younger cheerleaders to put on bathing suits, put in drink orders and go out on a yacht with a male suite holder and friends they had never met, Moseley said.

This apparently was common practice, as the 2018 Times report claimed, “at the end of a 14-hour day that included posing and dance practices, the squad’s director told nine of the 36 cheerleaders that their work was not done. They had a special assignment for the night. Some of the male sponsors had picked them to be personal escorts at a nightclub.”

Washington’s cheerleader program was disbanded after a 2020 legal settlement with former members of the squad.