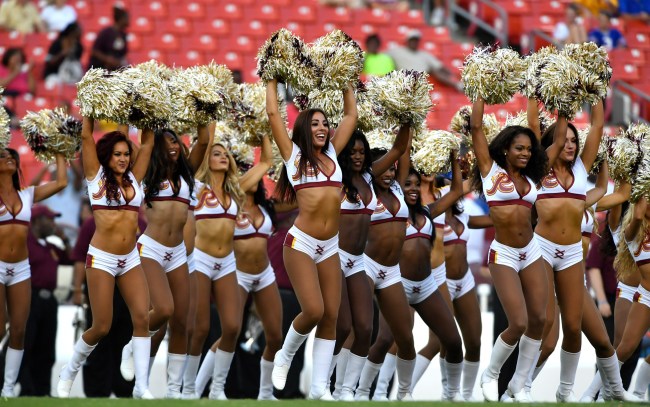 Three months ago, the NFL’s Washington Football Team was under fire for a slew of sexual harassment and verbal abuse allegations.

A little over a month later, another report claimed employees of the Washington Football Team secretly produced explicit video of cheerleaders specifically for the team’s owner Daniel Snyder.

On Friday, the Washington Post published a new report which claims that there are as many as 32 former Washington cheerleaders considering filing a lawsuit against the organization over secret videos of them that were allegedly produced which included images of them topless.

Attorneys Lisa Banks and Debra Katz, who represent 12 of the ex-Washington cheerleaders, notified Snyder last month of their intent to sue the team over the videos.

The team this week agreed to the attorneys’ request for an “independent forensic investigation” to secure any copies of the 2008 and 2010 videos and any other unauthorized cheerleader videos that may exist in its computer system. Banks and Katz also have met with the NFL, which in August assumed oversight of an investigation into the team’s treatment of women.

“My clients worked hard and proudly cheered for the Washington Football Team and in return were exploited and humiliated,” Banks said. “We are exploring all legal options to hold accountable those who are responsible, to protect my clients from further harm, and to effect positive change for all women who continue to work with the team.”

Attorney Gloria Allred said she represents another 20 ex-cheerleaders but declined to comment or make any of her clients available for interviews.

Then-senior vice president Larry Michael and owner Daniel Snyder were both implicated in the creation of the videos, copies of which were obtained by the Post, something both have either denied or refused to comment on.

Attorney Sharon Vinick, who previously sued and won wage-theft lawsuits against the New York Jets and Oakland Raiders, believes that while the relevant state’s statute of limitations has probably expired, she still thinks the former cheerleaders have a case, saying, “There is no reasonable expectation that when these women are signing away the rights to their images that they signed them away to be sliced and diced into a p-rn video.”