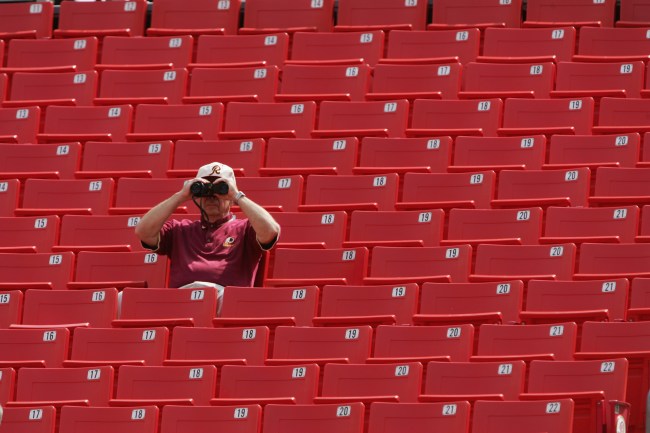 Another day, another lewd allegation against the Washington Football Team; which has had one of the most terrible past few months for a sports franchise in a long time. Following a report months ago from former employees accusing members of the franchise of sexual harassment, a recent article from the Washington Post claims that the team secretly produced an explicit video of its cheerleaders for team owner Daniel Snyder, with the women’s outtakes being used without their permission.

What the cheerleaders didn’t know was that another video, intended strictly for private use, would be produced using footage from that same shoot. Set to classic rock, the 10-minute unofficial video featured moments when nipples were inadvertently exposed as the women shifted positions or adjusted props. The lewd outtakes were what Larry Michael, then the team’s lead broadcaster and a senior vice president, referred to as “the good bits” or “the good parts,” according to Brad Baker, a former member of Michael’s staff. Baker said in an interview that he was present when Michael told staffers to make the video for team owner Daniel Snyder.

The allegations are being made by Brad Baker, who previously worked for former senior vice president and lead broadcaster Larry Michael — who abruptly resigned following the first allegations of sexual harassment within the Washington Football Team organization. The original video for the shoot came all the way back in 2008, but is still on the team’s website.

“Larry said something to the effect of, ‘We have a special project that we need to get done for the owner today: He needs us to get the good bits of the behind-the-scenes video from the cheerleader shoot onto a DVD for him,'” Baker told the Post.

The Post obtained a copy of the “good bits” video, as well as one made from the 2010 shoot. That version was allegedly burned to a DVD which was labeled “For Executive Meeting.”

According to the Washington Post story, Michael is denying the allegations made by Baker, and the Washington Football Team have no comment at this time. Additionally, one of the men Baker claims was involved in making the video, Tim DeLaney, who was Washington’s vice president of production at the time, fully disputes the report.

The story also reported that a former cheerleader, Tiffany Bacon Scourby, mentioned an incident where Daniel Snyder invited her to join “his close friend” in a hotel room so “they could get to know each other.” That story was supported to be true by the team’s former cheerleader director, along with three other people who supported the claim.

All of this comes on the heels of an offseason that saw the Washington Football team go through a name change, watch its young running back, Derrius Guice, get arrested at the team’s facility after domestic violence allegations, and have to endure claims that a former employee took money to spread rumors about Daniel Snyder (which is an ongoing legal dispute). These latest claims are even more disturbing, and, if true, (should) spell the end of Snyder’s tenure in D.C.