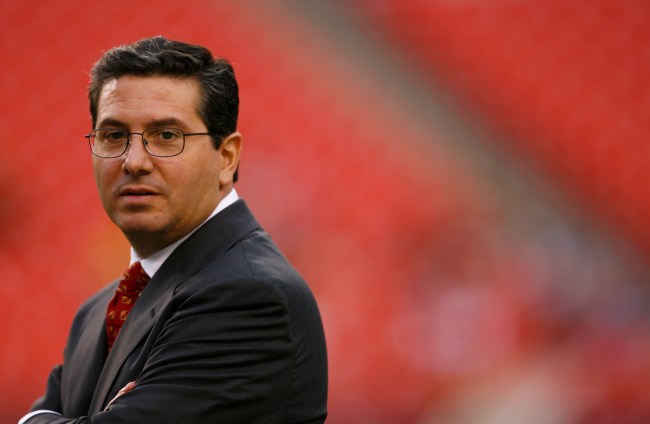 Daniel Snyder’s offseason has been quite the whirlwind already, but it’s gotten even more interesting over the past few weeks given some of the events that have occurred. Not only did his Washington Football Team drop its former name, the R*dskins, but the team also saw a former 2nd round pick (Derrius Guice), get cut after disturbing domestic violence charges; which included allegations of him choking out his girlfriend until she was unconscious.

Of course, those are just two of the major changes to Daniel Snyder’s organization in the past couple of weeks alone, which doesn’t even mention the bombshell report about allegations from 15 women of sexual assault within the organization, which resulted in some changes at the top and an internal investigation in order to make changes. To say it’s been a bad few months for Snyder’s reputation is an understatement — and it was made even worse by a former team employee, according to the owner.

Per Pro Football Talk, via ESPN’s John Keim, Snyder alleges that a woman named Mary Ellen Blair — a former executive assistant — collected money to make up false stories about him. The report also implies that the money may have been filtered in by someone who wants to force Snyder out of his ownership.

Via John Keim of ESPN.com, a Monday filing in federal court contains the assertion that former Washington executive assistant Mary Ellen Blair received money to help spread damaging information about Snyder, and that she “directly offered or alluded to the availability of bribes to current employees” of the team in order to elicit false information.

Snyder claims that Blair acted at the direction of, and with financial support from, the same persons who “hired and directed” meaww.com to publish defamatory articles about Snyder.

A New York Times article regarding the court filing claims that Blair began contacting current and former team employees in late May or early June in pursuit of information that would discredit Snyder. In July, Blair allegedly told a current employee that the person “probably could make a lot of money” by providing damaging information about Snyder.

As expected, Daniel Snyder’s attorney released a statement claiming Mary Ellen Blair was “a disgruntled former employee who is clearly in the pocket of another and complicit in this scheme to defame Mr. Snyder, in order to ensure that the full weight of the law comes down heavily on all those responsible for these heinous acts.”

In response, Blair’s lawyer, Lisa Banks, presented her counter argument, claiming her client “wish to communicate with legitimate news organizations about the culture of sexism, harassment and abuse that has existed at the highest levels of the Washington Football team for decades.” Take a look below at some of the details made in Monday’s filing.

Among other things, the filing claims that Blair told a long-time personal employee of Snyder’s that several minority shareholders didn’t want to do business with Snyder. Coupled with last month’s reports that the trio of minority shareholders — Fred Smith, Dwight Schar, and Robert Rothman — have been trying to sell their interests in the team, it’s impossible not to connect the dots and wonder whether Snyder wants to try to prove that one or more of his limited partners was the person recruiting people like Blair and websites like meaww.com to target Snyder.

Need more bread crumbs? The filing claims Blair has a “financial benefactor” who has helped her with rent in a luxury apartment building owned by Comstock. As noted by Keim, Schar’s daughter, Tracy, is on the Comstock board of directors and she serves as senior V.P. of marketing at Comstock Holding Companies. Also, two other members of Comstock’s board worked for Red Zone Capital, co-owned by Snyder and Schar.

Considering some of things that have been going on with Daniel Snyder’s Washington Football Team over the past few months (and years, really), it’s hard to immediately dismiss the claims made by Blair. However, if she was, in fact, profiting off defaming the longtime owner, well, that’s a whole different story that could result in some serious punishment.