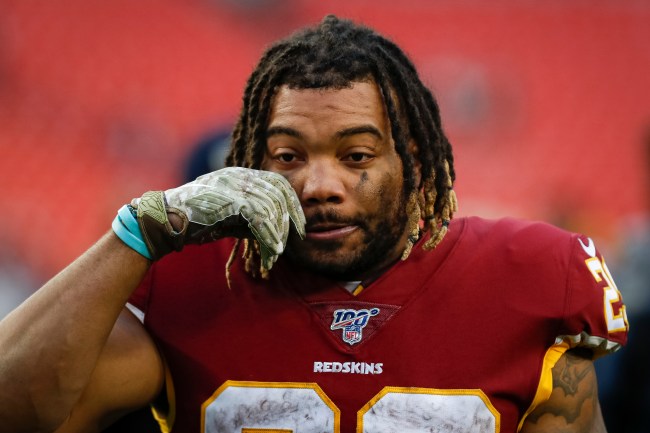 The Derrius Guice arrest that occurred Friday afternoon was already disturbing enough, with reports claiming that the former 2nd round pick of the Washington Football Team allegedly being handcuffed at the team’s facility after what was described as a domestic violence charge. But things got even more horrid as new details surfaced from charging documents.

Already believed to have been a choking incident from previous reports, an article from the Washington Post on Monday morning dug deeper into the Derrius Guice charges, claiming the since released player choked his girlfriend until she was unconscious, then stood over her crying and tapping her when she awoke.

Derrius Guice strangled his girlfriend until she was unconscious in his Ashburn home in March, according to charging documents. When she awoke, the NFL player was crying and tapping her.

The woman, who was only identified in court documents using initials, told authorities Guice also pushed her and pulled her hair during the encounter, according to the charging documents filed in Loudoun County General District Court Monday.

The most recent details are part of the various criminal charges against the 23-year-old running back, which include counts of strangulation and assault and battery that date back to March.

Following the incident earlier this year, documents claim Guice’s girlfriend left the D.C. area via a flight, and, during a layover in Chicago, took photos of her injuries in a restroom, according to those charging documents, suffering bruising to her neck, which also had colored spots on it.

In addition to the alleged March choking incident, Guice’s girlfriend also claims the NFL player “pushed her to the ground in his bedroom bathroom in February, causing an injury to her left thumbnail, according to charging documents. The nail eventually fell off because of a popped blood vessel,” per Washington Post.

Derrius Guice hired famed criminal attorney Peter D. Greenspun to represent him, with the attorney adding the below statement following the latest details from the charging documents.

“Derrius will defend these charges in court, where a full vetting of the allegations will take place, in contrast to actions by local law enforcement and the Washington Football Team that assumed the worst, directly contradicting every sense of fairness and due process,” Greenspun said.

The Washington Football Team announced shortly after Derrius Guice’s arrest on Friday that they had released him, as new head coach Ron Rivera has talked about changing the franchise’s culture following an offseason full of allegations and terrible PR for the longtime organization.