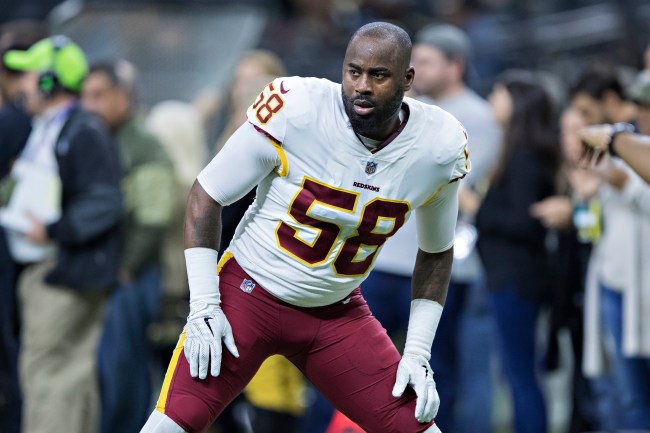 Now that the Washington Football Team has its new name for the 2020 NFL season — with the franchise replacing the R*dskins after pressure to change the name from a number of different places — some fans are wondering what might come next for the organization. After all, we all know that the current change is just temporary, so there’s a lot of speculation about what the nickname will become after going through the vetting and branding process.

Unfortunately, because a guy named Martin McCaulay holds a lot of the trademarks for some of the reported options, the Washington Football Team may be handcuffed when it comes to choosing its next name. Given the circumstances, the organization went with the safest bet in the short-term, and bought itself time to go through the proper procedure to get this right and not just choose something last-minute. While McCaulay has said he’s open to giving the team the rights to any of the nicknames he’s trademarked, time will tell how that situation all plays out.

The problem with the @Redskins approach is that they’ve telegraphed their name change to cash in on some good PR.

This has allowed others a huge head start to file trademarks on the most logical names. Per @WallachLegal, here’s an example of the names one squatter has cornered. https://t.co/7LyysLi5i4 pic.twitter.com/lVigQJfcVi

Although we’re stuck with the bland nickname in the present — which actually includes some badass (and simple) merchandise that’s available on Fanatics — there’s plenty of speculation that the team will ultimately rebrand itself as the “Red Wolves”; which is one of the names trademarked by McCaulay. In fact, according to one of the team’s former linebackers, Junior Galette, he’s heard from people inside the team’s personnel department that the new name will, in fact, be the Red Wolves. Here’s what Galette had to say in an interview with The Spun.

“No, that wasn’t me throwing a name out there,” Galette told The Spun. “That was a name that people from the personnel department told me was the highest bidder to win, but then they went temporarily with the Washington Football Team.”

Galette’s doubling down on his proclamation from mid-July that the Washington Football Team will adopt the Red Wolves nickname at some point, according to his Twitter account.

Didnt I already tell you guys what the name is? https://t.co/VGxz42Av38

Even those who aren’t fans of the longtime franchise are interested in hearing what comes next for the team. While we’ve been teased with temporary uniforms for the 2020 NFL season, there’s no doubt going to be a lot of guesses over the next year or so about what the new nickname could be. If Junior Galette says he’s heard from internal sources that it’s going to be the Red Wolves, I suppose we take it at face value. Then again, with the team going through a thorough process to find the right name, this whole situation seems fluid with any option on the table.