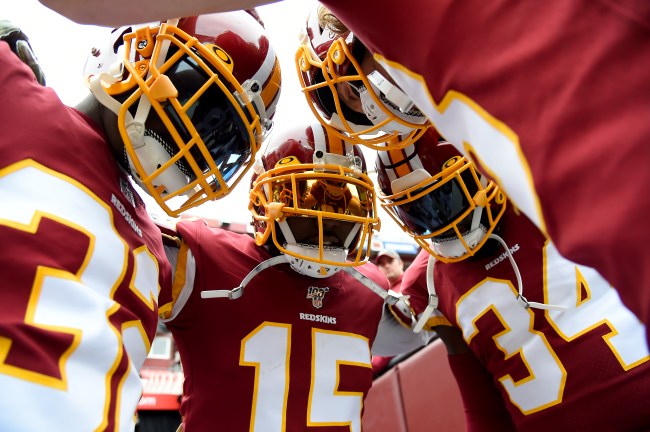 Now that the the Washington Football Team has made a decision about its (sorta lame, but sorta cool) new nickname for the upcoming season, football fans are starting to slowly see some of the new branding that the franchise is starting to release. Remember, prior to the team changing its name from the R*dskins, big-time realtors were already pulling merch off its digital shelves, refusing to support an organization with a racist nickname.

Since then, the Washington Football Team has released some merch for fans to snatch up, which is both simple and pretty sharp at the same time, making it a decent look for fans to wear.

Now that we’ve got an idea of what the merch looks like for the Washington Football Team, the next thing every fan naturally wants to know is this: What are the uniforms going to look like? Well, for those wondering, we’ve now got an answer — thanks to the team’s official Twitter account and star safety Landon Collins, with post taking to social media to reveal some of the threads.

It's the uniforms for us 👏 pic.twitter.com/7BGOmSqjMY

Now, if your eyes think they’ve seen a similar look before, it’s because they probably have. The numbers on the helmet are an old staple for many college football teams, namely the Alabama Crimson Tide, and the dark Maroon with the Gold accents is sort of similar to that of Florida State’s uniforms; which, when combined, really look clean, sleek and, in a weird way, modern.

After seeing the new uniforms of the Washington Football Team, plenty of people on social media had reactions. Most of them were pretty kind, while some people had jokes, so take a look below at what fans were saying.

Step 1 – Draft a ton of Alabama players
Step 2 – Helmets redesigned to only have player #
Step 3 – Change team name to The Red Tide
Step 4 – Use existing slogans and collateral pic.twitter.com/D4cbYWqg0p

Would much rather us use these. pic.twitter.com/3uYqa6IggQ

This is low key funny asf 🤣

Look, most people will never be happy with change — especially from something that has been the same for the past 88 years like the R*dskins franchise has been. But the fresh look and new uniform design from the Washington Football Team isn’t too bad considering they did a complete overhaul of the team’s brand in such a short amount of time. We all know this is just temporary for the upcoming NFL season anyway, and the team’s going to look for a proper nickname for 2021 and beyond, so, knowing that, these unis should be good enough to watch the team struggle to another four-win season in 2020, right?