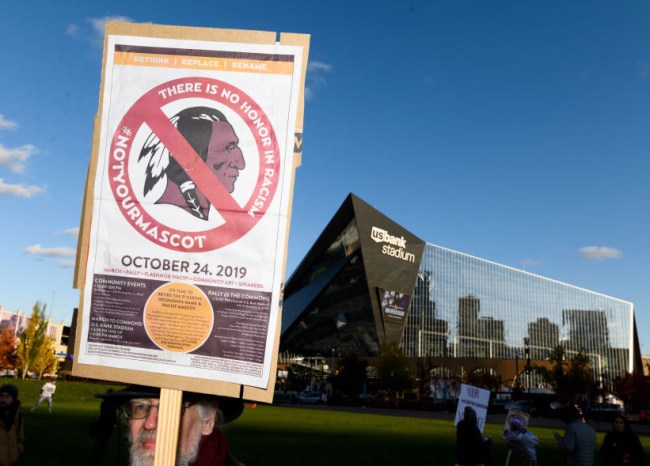 When the Boston-based team that would eventually become the Washington Redskins adopted that moniker in 1933, no one really had a problem with it, which may have had something to do with the fact that the decision came at a time when most people did have a problem with interracial marriage, women leaving the kitchen, and those god damn Okies stealing everyone’s jobs.

The team’s logo would go through various iterations over the next few decades, and in 1972, a Native American leader named Walter “Blackie” Wetzel offered to whip up a new one that depicted what he described as “a real Indian,” which was an amalgamation of the several Blackfeet Nation chiefs he used for inspiration.

By that point, many Native Americans had joined a gradually growing movement to push back against the negative stereotypes that had shaped public perception for centuries. Some members of Wetzel’s tribe voiced their support but others were less than thrilled, which is fairly understandable when you consider you could be forgiven for looking at the logo and assuming it was the product of a member of the Redskins organization telling a commissioned artist “Just draw the most stereotypical Indian you can imagine.”

Calls for the team to reconsider its entire identity grew increasingly louder with every year that passed but they largely fell on deaf ears. This all changed after Dan Snyder purchased the franchise he’d grown up rooting for in 1999, as he heard the critics loud and clear and decisively addressed the matter in 2013 when he told USA Today, “We’ll NEVER change the name” (and yes, he instructed them to use caps).

It’s worth noting that multiple polls conducted around the time showed most Native Americans didn’t take issue with the name, but at the end of the day, the real reason critics were powerless is because Snyder is an asshole billionaire who would choke to death if he was ever forced to swallow his massive pride.

However, that all changed earlier this month when major corporate sponsors including FedEx, Nike, and Pepsi all decided to hit him where it hurts: his dick.

Wait. Sorry. His wallet. It was his wallet.

After FedEx reached out to strongly suggest the franchise should look into changing its name, the team announced it would begin exploring other options but ran into a bit of an issue after some random dude scooped up the trademarks for 40 of the top contenders.

However, last week, the Team Formerly Known As The Redskins announced it had come to a decision by unveiling it will be taking to the field this season (assuming there is one) as the “Washington Football Team.”

I honestly thought Adam Schefter was fucking with everyone when he broke the news, and when I found out he wasn’t joking, I couldn’t help but feel this was an admittedly hilarious troll job by Snyder, as I can’t think of a better way to respond to accusations of racism than pivoting to the most generic option possible.

The name may just be a placeholder, but if you think that’s going to stop Snyder and the NFL from cashing in on it, you must be new around here. I hate to say it, but I can’t help but give respect for respect is due for playing this hand as well as they did, because even though I have no connection to the team whatsoever, I will absolutely be purchasing some of the apparel that was unveiled on Tuesday.

Here’s what some of the official apparel looks like, which is also available for purchase on Fanatics.com:

I’m an absolute fiend for vintage t-shirts originally designed to help 90s tech companies promote themselves and ones that were produced to be launched into the stands at a Seattle Supersonics game, as they possess a certain and subtle kind of ironic aura that can normally only be developed by sitting in a storage bin for 15 years.

However, this Football Team merch has the exact same vibe without any of the aging usually required so I can’t even imagine what the resale value is going to be when these start popping up on eBay in a couple of decades. You may honestly never find an investment capable of paying off as much as these will in the short and long term.

Check out the merch for yourself at Fanatics.com