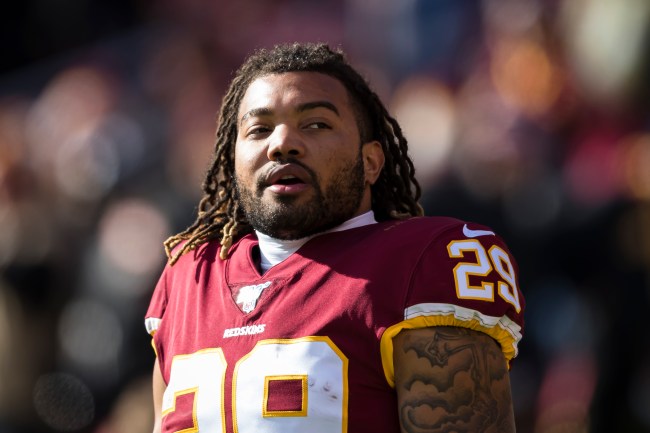 Derrius Guice, a running back for the Washington Football Team who was drafted in the 2nd round of the 2018 NFL Draft out of LSU, has turned himself in to Loudon County police following charges of domestic violence; one of which includes strangulation, which is a felony.

According to the Washington Post, other charges against Guice include three counts of assault and battery, as well as one count of destruction of property, which led to the NFL player being handcuffed in the parking lot of the team’s facility Friday afternoon. The image is pretty surreal, to say the least.

The arrest of Derrius Guice is the latest chapter in an ongoing saga for the Washington Football Team franchise, which included a bombshell report about allegations from 15 women of sexual assault within the organization, the hiring of a new head coach (Ron Rivera), and criticism and pressure to change their name from the R*dskins to the current name — which is believed to be a placeholder for the upcoming season.

Given Guice’s arrest, it’s the most recent ordeal that Rivera must face to try and change the culture of the franchise. After seeing its 23-year-old running back in handcuffs in the team facility’s parking lot, one would imagine the talented player may find himself released soon; following an investigation into the domestic violence charges.

The running back has reportedly hired famed criminal attorney Peter D. Greenspun to represent him, with the attorney seen entering the jail shortly following Derrius Guice’s arrest on Friday afternoon. He left with no comments on the situation.

While details have yet to surface about the charges, the Washington Football Team did officially release Guice, per Ian Rapoport of the NFL Network.

It seems like the most obvious news given Ron Rivera talking about a culture change, so we’ll have to wait and see more information about the incident as it’s released.