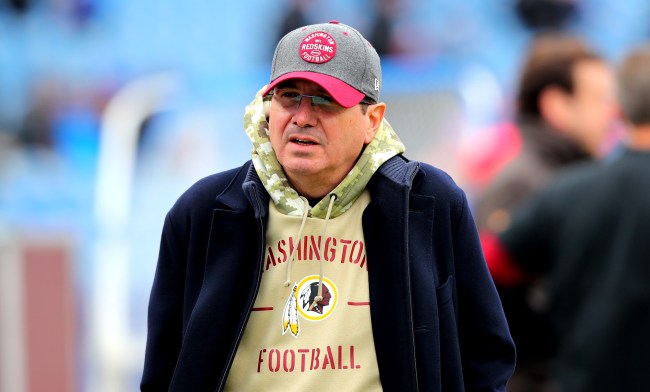 Team owner Daniel Snyder finally issued a statement about the numerous sexual harassment allegations made against people in the Washington Redskins organization.

Following the revelation on Thursday about 15 women accusing Washington team employees of sexual harassment, and as the franchise prepares to change the team’s offensive nickname, Snyder was nowhere to be found.

While not specifically mentioned in the allegations, many members of Snyder’s “inner circle” were named and the Redskins’ owner appeared to be in no hurry to address the allegations.

Friday morning, he issued a statement to the press.

“The behavior described in yesterday’s Washington Post article has no place in our franchise or society,” the statement read.

“This story has strengthened my commitment to setting a new culture and standard for our team, a process that began with the hiring of Coach Rivera earlier this year.

“Beth Wilkinson and her firm are empowered to do a full, unbiased investigation and make any and all requisite recommendations. Upon completion of her work, we will institute new policies and procedures and strengthen our human resources infrastructure to not only avoid these issues in the future but most importantly create a team culture that is respectful and inclusive of all.”

The aforementioned Redskins coach Ron Rivera beat his boss to the punch by more than half a day, giving a statement of his own on Thursday.

“Biggest thing is we have to move forward from this and make sure everybody understands we have policies that we will follow and that we have an open door policy with no retribution,” said Rivera. “Plus my daughter works for the team and I sure as hell am not going to allow any of this!”

The NFL also waited until Friday morning before giving its take on the Redskins situation.

“These matters as reported are serious, disturbing and contrary to the NFL’s values,” the NFL’s statement read. “Everyone in the NFL has the right to work in an environment free from any and all forms of harassment. Washington has engaged outside counsel to conduct a thorough investigation into these allegations. The club has pledged that it will give its full cooperation to the investigator and we expect the club and all employees to do so. We will meet with the attorneys upon the conclusion of their investigation and take any action based on their findings.”

So the NFL will be deferring to a lawyer, hired by Snyder, to address the issues in the organization.

Based on the NFL’s statement, discipline could be coming to Washington. The team pledged cooperation and the league said it will “take any action based on the findings.” https://t.co/jsroNPp2lN

Looks like NFL insider Adam Schefter was right when he said on SportsCenter on Thursday, “Dan Snyder is going to own the team and that’s not gonna change.”

Nor, apparently, is how poorly the NFL deals with misbehavior by the men who are part of their elite club.