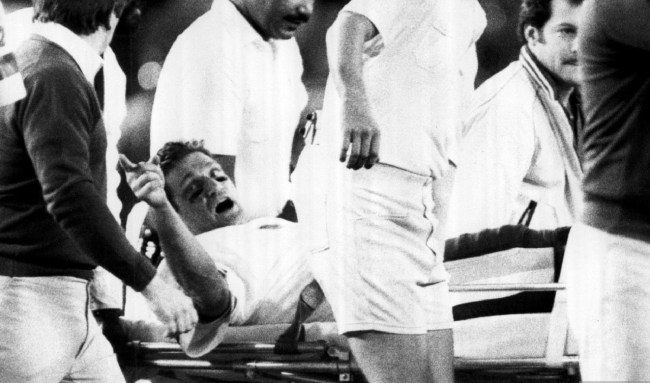 Washington Redskins owner Daniel Snyder is reportedly not a good dude. He’s also taken one of the most popular NFL franchises and mismanaged it so badly that many of the team’s once diehard fans are now rooting for the nearby Baltimore Ravens.

So when ESPN analyst Todd McShay saw his friend Urban Meyer in Snyder’s owners box at Sunday’s Redskins game versus the Philadelphia Eagles he became very concerned that Meyer might be considering taking the head coaching job in Washington.

During his appearance on The Dan Patrick Show on Thursday, McShay was asked if Meyer would consider taking the ‘Skins job. The answer? Not if McShay has anything to say about it.

“I’ve been holding back from calling Urban this week, wondering what he was doing in the box. If the current structure… I couldn’t allow a friend to take the job without saying something,” said McShay.

McShay added, “I’m just saying hypothetically, any friend out there that would have any interest in taking that job, I would make a phone call and say ‘Make sure you get a football guy who’s in between the owner and you.’ And that can completely run the football stuff, who can make the decisions. That’s the issue. Right now, under the current construct, Washington can’t succeed.

“They need Daniel Snyder to take a step back, they need to hire a gneeral manager that knows football and can evaluate players, and then they need a coach who can take those players and develop them.”

Then he dropped a dagger into the hearts of all the Redskins fans that are left.

Turns out Meyer was just a guest of one of his former players wide receiver Terry McLaurin. (He also coached Dwayne Haskins in college.)

Former Redskins quarterback and Native American spokesman Joe Theismann was not down with what McShay had to say about his former team, however.

Speaking to 106.7 The Fan, Theismann said, “Well, first of all, let me say this, Todd McShay is not in a competent position to make that kind of statement. I think the Redskins, to me, are a very attractive franchise because of the youth of this football team. You could have said that the San Franciso 49ers a few years ago weren’t very attractive. I think Todd McShay is way offline in his comments. Way out of line.”

With regard to McShay saying he’d rather coach 31 other teams, Theismann responded, “What does he base a comment like that off of? Those are the kind of things that upset me, when people make irresponsible statements. This franchise is brimming with young talent, the defensive line, the linebackers, the secondary, the offensive line, I think the wide receiver position, the quarterback position. Are you kidding? I would love the opportunity to be able to come in and coach this franchise.”

Theismann rambled on for a while longer before saying, “I think that’s a very irresponsible statement by someone who doesn’t know jack-diddly about football.”

“Would you want the Carolina Panther football team?” Theismann continued. “Versus the Reds… look at the Redskins football team. Look at all the youth, the young guys that are playing, not just playing, but playing pretty darn well. [Ed. Note: They are 3-11] You look at the Washington Redskins franchise and then tell me what you have in Carolina? What does Carolina have to offer to someone? You’ve got Christian McCaffrey, okay? You’re unsettled at your quarterback position. Your wide receiver position is still somewhat questionable. Your offensive line is somewhat questionable. Your defense… we proved you can run the living daylights through ’em, and a lot of other people have done that. So when you start to talk about 31 other franchises being more attractive I have to question the research that anyone has done into other franchises.”

I like how Theismann used the word “we” there, like he’s still part of the team. Sounds like Daniel Snyder has found his man to become the eighth head coach he’s hired in his 20 years as an owner!