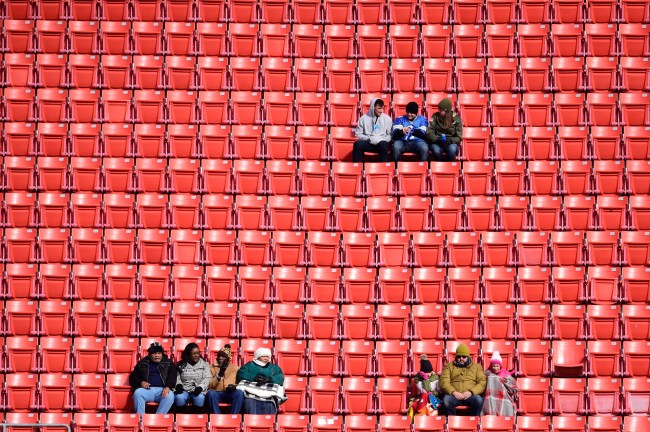 Well, some fans showed up, but it appeared to be Detroit Lions fans who filled a majority of the seats at FedEx Field for Sunday’s Washington Redskins’ home game.

Pretty amazing when you consider that tickets for the game were being sold for as low as just $4. That’s right. Tickets for an NFL game on a nice day in November were going for less than a minor league baseball game, and still almost no one wanted to go.

Heck, some club level seats were sellng for only $15!

Sure, the Redskins entered the game 1-9 and the Lions 3-6-1, having lost six of their last seven games, but it’s not like there was a blizzard happening or something. Too bad for them. They missed out on seeing their rookie quarterback take a knee in victo… What’s that? Oh, never mind.

It would appear that fans in D.C. have simply had enough of the dumpster fire that is their home team as it appeared they were outnumbered by fans of the Lions who were there to watch… one sec… Jeff Driskel quarterback their team to a 16-19 defeat.

If there weren't any Lions fans here at FedEx Field there wouldn't be any fans at all.

There might be a greater percentage of Lions fans to total fans here in Washington than at Ford Field last week against Dallas.

At one point in time, getting a ticket to a home game being played by the Washington Redskins was next to impossible. Same for Miami. Those days are long, long gone.

Bruce Allen takes a lot of heat. But you have to give him credit for sticking to his word. He vowed to fix the traffic and parking issues. There is no longer gameday traffic and everybody gets there own row of spaces to park in. Give him credit for that at least. pic.twitter.com/vGfRS7jyNp