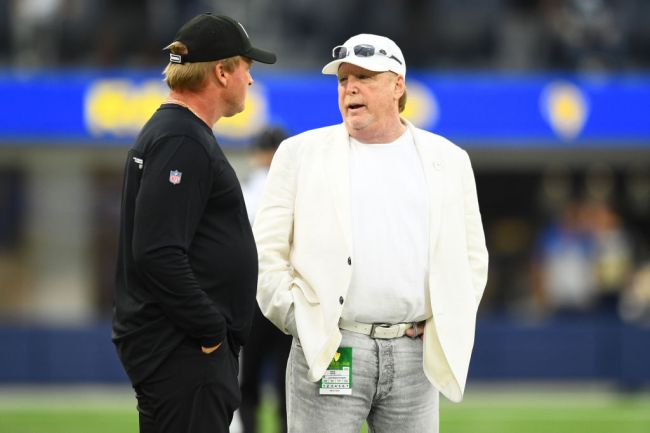 Earlier this week, Gruden resigned as the Raiders head coach after his old misogynist, racist, and homophobic emails were leaked to the media.

“I have resigned as Head Coach of the Las Vegas Raiders. I love the Raiders and do not want to be a distraction. Thank you to all the players, coaches, staff, and fans of Raider Nation. I’m sorry, I never meant to hurt anyone.”

Considering the fact that several insiders believe the NFL leaked the emails on purpose to get Gruden fired, people within Davis’ inner circle believe the league is trying to get rid of the Raiders owner according to NFL reporter Jason Cole.

Plenty of people around Raiders owner Mark Davis believe that the NFL is trying to find a way to get rid of him … and they have told Davis that.

I didn’t say they were. I said people around him think that. Those people think the NFL thinks he’s not competent. A lot of paranoia right now.

Mark Davis for his part has stayed silent about the Gruden situation when asked.

Just spoke with #Raiders owner Mark Davis: "I have no comment. Ask the NFL. They have all the answers." Also confirmed that Mike Mayock remains GM and now has 51 percent control of roster decisions, with interim coach Rich Bisaccia at 49 percent. Was Gruden 51/Mayock 49 before.